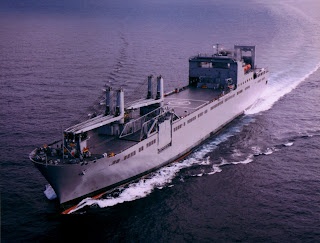 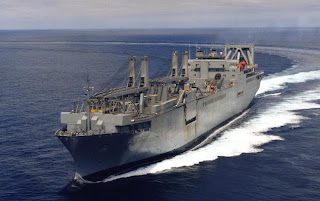 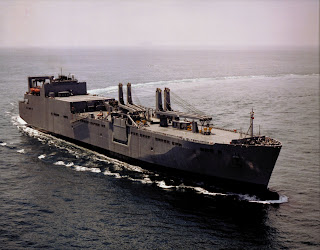 When the topic is logistics, the armchair warriors go off to the corners and talk about something else. But those who plan wars spend a great deal of time wondering about how the XXnd Divison is going to get all its people and things from place Y on the earth's surface to location Z.

In the old days, the Navy was in charge of transporting things like divisions across the oceans of the world. The component that was in charge of having the ships to do so was the Military Sealift Command (MSC). In today's modern military, MSC is a part of the United States Transportation Command or Transcom. Transcom's mission:

Provide air, land and sea transportation for the Department of Defense, both in time of peace and time of war.

Down within the other missions MSC carries out is "surge shipping." "Surge shipping" is defined as:

Surge shipping is critical to the nation's combat readiness. Surge sealift includes three key resources which are kept in reduced operating status until they are needed in a crisis. These include: eight Fast Sealift Ships, eleven Surge LMSRs and 44 Ready Reserve Force, or RRF, Ships.

The FSS are the fastest cargo ships in the world--traveling at speeds up to 30 knots. Unlike most ships in the U.S. flag market, they are ideally suited to carry tanks, trucks and other out-sized military vehicles. Together, these huge roll-on/roll-off ships can carry nearly all the equipment needed to outfit a full Army mechanized division.

MSC's Surge LMSRs, while not quite as fast, can carry up to 380,000 square feet of cargo, the equivalent of eight football fields, at speeds up to 24 knots. The Surge LMSRs can be ready to sail in 96 hours, like the Fast Sealift Ships. 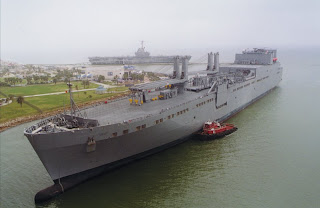 The RRF ships are maintained by the Maritime Administration in peacetime and come under the control of the MSC when activated in wartime or during other contingencies. The ships can be activated and ready to proceed to a loading port in four to 20 days, depending on their specified readiness status. RRF ships include roll-on/roll-off ships, crane ships, breakbulk ships, tankers and other ships not readily available in the U.S. commercial market. The RRF offsets industry's shortage of militarily useful ships.

By way of background, the FFS are all converted Sea-Land ships, steam powered and can go very fast, up to 33 knots. Inside the Navy, these ships are referred to as "SL-7s" (SL referring to Sea-Land). More about the SL-7s here. You might note that the SL-7s are getting a little long in the tooth.

During Desert Shield/Desert Storm. some deficiencies in the ability of the U.S. shipping fleet became glaringly apparent when the U.S. was forced to rely on ships from other nations to get material to and from the theater. The FFS, while important, can't do the job by themselves. Thus began the push for more surge sealift and the development of the Large Medium Speed Roll-On/Roll-Off (LMSR) ships: 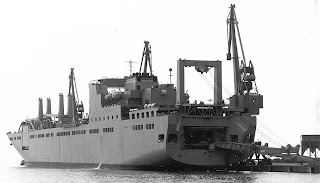 Military Sealift Command's newest class of ships - Large, Medium-speed, Roll-on/Roll-off Ships, or LMSR - will significantly expand the nation's sealift capability in the 1990s and beyond. Nineteen LMSRs were converted or built at U.S. shipyards by the year 2001. The LMSRs will provide afloat prepositioning of an Army heavy brigade's equipment and a corps' combat support, as well as surge capability for lift of a heavy division's equipment from the United States. As wide and long as the FSS, the LMSRs carry almost twice the cargo because of the hull design and number of decks. Pedestal cranes and both side and stern ramps mean that the LMSR is ideally suited for undeveloped ports or logistics over the shore.

The need for additional military sealift ships was identified in a Congressionally-mandated study by the Joint Chiefs of Staff in the early 1990s. The Mobility Requirements Study focused on Department of Defense transportation during the Persian Gulf War. It highlighted the urgent need for greater sealift capacity to transport military equipment and supplies during wartime and other national contingencies. In response to the sealift shortfall, an ambitious Strategic Sealift Acquisition Program was introduced. Plans called for adding 19 LMSRs which will provide five million square feet of capacity early in the next century.

The LMSR program currently has 19 ships, 5 of which will be conversions of existing commercial container vessels, and 14 of which will be newly constructed ships. All 19 ships use common cargo handling systems, procured by the Navy. LMSRs are being built by three contractors. A performance type procurement description was used, therefore specific ship configurations differ as the respective builders interpret the mission requirements.(emphasis added)

The LMSRs come in three different classes, including the Bob Hope class, of which the lead ship saw its first action in the Kosovo follow-on:

Peace in Kosovo was signaled from far away. It was announced by the roar of diesel engines and the clanking of metal as the combat vehicles of the U.S. Army's peacekeeping task force arrived at the port of Thessaloniki, Greece. Uncle Sam was on the ground and headed for Kosovo.

There was no time to lose. With the air war over but disorder swirling in Kosovo, General Wesley Clark, the Supreme Allied Commander Europe, requested the urgent movement of promised peacekeepers from NATO nations. Each day and each hour counted—the U.S. Army was needed in Kosovo immediately to begin peacekeeping duties.

The vehicles began streaming like a long ribbon from the USNS Bob Hope on 30 June 1999. Three days later, the scene was repeated with the USNS Soderman. Later, the contract vessel Osprey arrived from Beaumont, Texas, with equipment from several continental United States (CONUS) Army installations to augment the task force.

The unloading at Thessaloniki was directed by soldiers and civilians assigned to several Military Traffic Management Command (MTMC) ports under the 598th Transportation Group, which is headquartered at Rotterdam, The Netherlands. The transporters teamed up with soldiers of the 1st Infantry Division (Mechanized), which is based in Germany, and together they quickly grouped the tracked and wheeled vehicles of all kinds into serials organized by unit.

Hundreds of 1st Infantry Division drivers fell in on their vehicles. Hours later, in the muted early morning hours, the vehicles were proceeding in long columns up the highway to Skopje, Macedonia. There, the main force of 1st Infantry Division soldiers, who had been airlifted from Germany, would join up with their vehicles. The move to Kosovo was on.

How does the use of LMSRs during Jan/Feb 2003 (build up for Iraq) compare to movement of cargo during to Desert Shield/Storm? See here:

Between late January and early February, TRANSCOM delivered within 30 days the same amount of supplies that took six months to get to the Persian Gulf for Operation Desert Storm, said Handy. He attributed the higher efficiency to the availability of better military cargo airplanes, specifically the C-17, and to the acquisition of 19 more container ships known as “large medium-speed roll-on roll-off.” TRANSCOM activated 36 LMSR ships for a possible conflict with Iraq.

“Purposeful investments made after Desert Storm allowed us to do this thing without so much of the agony,” said Handy.

The other classes of LMSRs is the Watson class, like the Bob Hope class, new builds and the "converted" LMSRs such as USNS Shughart (T-AKR 295). See here. The Watson ships are all "prepositioned" and the Hope and converted classes are "surge" oriented. All the ships except the Bob Hope and the Fisher are named after Medal of Honor recipients.

By the way, sometimes the military wants more speed and ideas other than ships come along. Some ideas include DARPA's "Walrus" as set out here:

The Defense Advanced Research Projects Agency (DARPA) has launched the WALRUS Program, which will study the feasibility of a new air vehicle capable of transporting 500-1,000 tons of military payload across 6,000 miles within 4 days.

The US military identified deficiencies in its strategic airlift capability as far back as after the first Gulf War. Interest waned by the mid-1990's, but the recent conflicts in Afghanistan and Iraq have again underscored the airlift need. 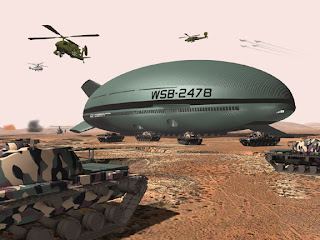 Additionally, the need has been amplified by a key change in US military doctrine referred to as the "10-30-30" objective: to be able to deploy to a distant theater in 10 days, defeat an enemy within 30 days, and be ready for an additional fight within another 30 days. DARPA WALRUS envisions transporting an entire battle-ready Unit of Action from its operational US base to near enemy lines, termed "from fort to fight". The WALRUS air vehicle would dwarf every aircraft in existence today, with a total hull length anywhere from 600 to 1,000 feet.

Or, as DARPA itself notes:

The Walrus operational vehicle (OV) is envisioned to have the primary operational task of deploying composite loads of personnel and equipment (for example, the components of an Army Unit of Action) ready to fight within six hours after disembarking the aircraft. Walrus will operate without significant infrastructure and from unimproved landing sites, including rough
ground having nominal five-foot-high obstacles. It is intended to carry a payload of more than
500 tons 12,000 nautical miles in less than seven days at a competitive cost. Additionally,
Walrus will be capable of performing theater lift and supporting sea-basing and persistence
missions to meet a range of multi-Service needs.

More at theAeroscraft website. By way of reference, a C-5 transport can carry up to 145 tons of cargo. Or, as noted here:

One LMSR container ship, for example, can carry the equivalent of 302 C-17 loads. The average LMSR cargo can be unloaded in two to three days, a relatively fast turnaround. “I could not close 300 C-17 sorties in two to three days,” said Handy. Most major seaports can accommodate from two to four LMSR ships in a single day. Smaller ports can take one or two vessels a day.

When the need is to move mountains of stuff from one port to another, then there is nothing quite like the capacity of these great big ships. So, a salute to the logistics guys and the planners and the merchant mariners who man these very important strategic assets. And another to the military teams that ride along with the equipment, too.