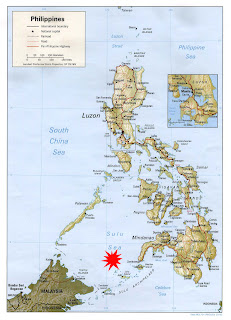 More than 10 warships are around Sulu in what could be the single biggest naval blockade meant to trap Abu Sayyaf terrorists in their lair.

He said the new tactic involves a coordinated land and sea approach to smashing the terrorists.

Believed trapped in the jungles of Sulu, aside from the remnants of the Abu Sayyaf, are Indonesia-based Jemaah Islamiyah militants. The two groups are linked to Osama bin Laden’s al-Qaeda global terror network and are on the US list of international terrorist organizations.

In an interview with The STAR, Esperon disclosed that BRP Rizal leads the Navy vessels in patrolling the Sulu Sea to seal off the terrorists’ potential escape routes. The military’s offensives have been going on since August last year.

Esperon was hesitant to call it a blockade "because the ships are moving around."

But reliable sources said the Philippine Navy was getting assistance from US forces for the blockade.

Given the size of the Navy ships involved, Esperon said, the actual blockade would stretch to only a kilometer – certainly not enough to cover the wide expanse of the Sulu Sea.
***
He also stressed that the USS Blue Ridge, which is in the country for humanitarian mission, is not part of the Sulu Sea patrol. The Blue Ridge is the flagship of the US Seventh Fleet.

"If they (US ships) are there in Sulu, they must be in the international waters. I don’t even know if they are there," Esperon said. The US Navy vessel, which docked at the Manila South Harbor recently, is also scheduled to visit Cebu and Gen.Santos City.

The Sulu offensive has led to the deaths of top terrorist leaders Khadaffy Janjalani and Abu Solaiman.