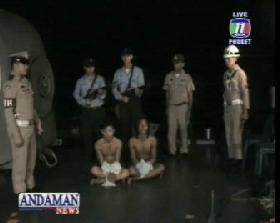 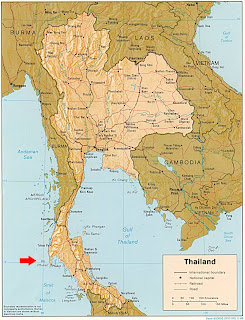 A mutiny and murder at sea reported here:

Two Burmese, named Suyanai and Siaui, both 24 years old, were arrested by the Royal Thai Navy on the Thai fishing boat named Maungdam on which the two Burmese and seven other Burmese crew members had mutinied and tried to rob the boat from the Thai captain. The investigation reported that the Maungdam fishing boat had three Thai crew and nine Burmese crew for fishing in the Andaman Sea and the boat was near to the Similan islands about 40 nautical miles away from the shore, when the nine Burmese crew attacked their captain of the vessel with a sharp knife and pushed him off board. One of the Thai crew member was stabbed to death while a mechanic jumped into the sea, survived and was rescued by another fishing vessel. After being notified, the Royal Thai Navy sent out their ship and patrol boat and managed to arrest the pirates and found the Burmese were trying to set fire to the boat; finally two Burmese were arrested and the captain of the ship was found and brought to Takuapa hospital due to his serious injuries.