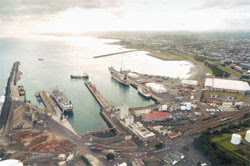 Scientists and engineers are hard at work seeking technological solutions to the container security challenge. One area that offers promise is nanotechnology. Nanotechnology is the development of devices, such as sensors, that are on a nano scale.
***
“We (PEL Associates) have developed technology which can readily achieve the goal of container security at a low cost. The method is based on smart sensors, a version of which is being developed for DARPA (Defense Advanced Research Project Agency).” Added Wallach, “In this approach micro-sensors (~2-3mm spheres) are designed with surface groups reactive with chemicals and biological hazards. On reaction the sensors emit an agent specific color or IR signal wirelessly to a control system.”

Continued Wallach, “In the case of a dirty bomb or WMD the sensors are designed with a conductive coating. In the presence of such hazards which characteristically emit energetic particles the air in the container becomes ionized and on contact with the sensors the conductivity is changed in a characteristic manner which is picked up wirelessly by central control systems.” Wallach concluded by noting how the nanotechnology is physically applied, “the sensors are impregnated on to the surface of a thin plastic film which is adhered to the wall of the container.” According to Wallach the cost is “very small,” about 3-5 cents per sensor or five dollars per container.

The authors of the piece describe other security-driven uses of nanotechnology in the piece.