Some thoughts on the Canadian Navy 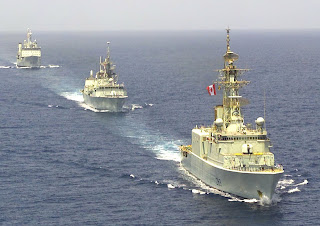 Some thoughts on the future of the Canadian Navy and its place in the new world here:

Looking into the future is an inexact science at best, but Boutilier says there are some trends that can be followed.

“We are now looking at what’s going to be the future of our Navy,” he says. “We’ve gone from the golden period on the ‘90s to a time when we are getting into difficulty. Some of our destroyers are more than 30 years old, our supply ships more than 30 years old, and these ships are nearing their half-life. From my perspective, we are in the most dynamic maritime era of almost living memory. There’s container traffic, oil and gas traffic moving by sea, there are submarines, offshore disputes, piracy, terrorism. What is going to be the responsibility of the Navy?”

“Where do we put our Navy? Do we have ships like this right on the coast, or far out at sea? Should we move more ships from the Atlantic to the Pacific?” he asks. “There are more and more challenges not stemming from terrorism, but from fisheries. What does it mean when oil and gas become more and more critical to the economies of China and India?”

These issues, he says, are often overlooked in the public debate, because, unlike armies, they tend to keep a fairly low profile.

“When the navies are doing their job, they’re out of sight, out of mind, unlike armies,” he says. “The Navy does its job over the horizon.”