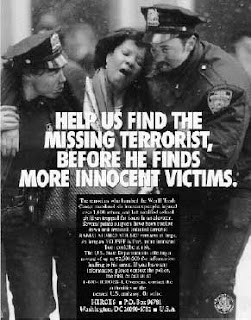 When the War on Terror got started on U.S. soil - by the other side- February 26, 1993 World Trade Center bombing:

The 1993 World Trade Center bombing occurred on February 26, 1993, when a car bomb was detonated below Tower One of the World Trade Center in New York City. The 1,500 lb (680 kg) urea nitrate-hydrogen gas enhanced device was intended to knock the North Tower (Tower One) into the South Tower (Tower Two), bringing both towers down and killing thousands of people. It failed to do so, but did kill six people and injured 1,042.

More here, with a prescient quote:

Thousands of office workers were trapped as smoke billowed up through the buildings.

With no working lifts or lighting there was total pandemonium. 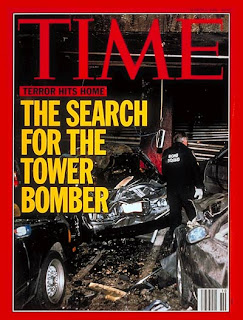 People did not know whether to stay in their offices or brave the journey down via the smoke-filled stairwells.

"It felt like an airplane hit the building," said Bruce Pomper, a 34-year-old broker.

Email ThisBlogThis!Share to TwitterShare to FacebookShare to Pinterest
Labels: The Long War, War on Terror