Stopping Iran from getting "go-fasts" 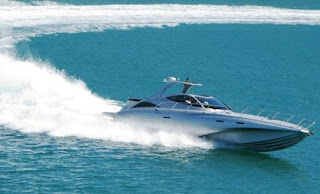 MarineLink notes Export Privileges Denied to Iranian Co.. Links to a Holland & Knight report that export of a high speed boat for the Iranian Republican Guards has been forbidden by the Department of Commerce Bureau of Industry and Security ("BIS") here. Useful information: Tadbir Sanaat Sharif
Technology Development Center (TSS hereafter) and Icarus Marine (Pty) Ltd. are essentially defendants and there was a scheme to smuggle a high speed boat to South Africa and then to Iran and the ruling herein is aimed to prevent that. The ruling

In its request, BIS has presented evidence that the Respondents are about to engage in conduct prohibited by the EAR by re-exporting U.S.-origin items, which are subject to the Regulations and classified as Export Control Classification Number (‘‘ECCN’’) 8A992.f and .g, from South Africa to a Specially Designated National (‘‘SDN’’)located in Iran using a specially designated blocked vessel, owned by a
Specially Designated National, to complete the transaction. Specifically, BIS has reason to believe that TSS has been attempting to procure a Bladerunner 51 powerboat, a vessel known as the ‘‘Bradstone Challenger,’’ for use by the Iranian Revolutionary Guard Corps (‘‘IRGC’’), specifically the IRGC Navy, to be transported to Iran on an IRISL vessel. The Bradstone Challenger will imminently be re-exported from South Africa on an IRISL vessel called the M/V ‘‘Diplomat,’’ also known as the ‘‘Iran Diplomat,’’ with a vessel registration identification number IMO 8309701. IRISL and its entire fleet, including the Diplomat, is also listed in the
Department of the Treasury, Office of Foreign Assets Control (OFAC)
Specially Designated Nationals list as is the IRGC, pursuant to Executive Order
13382 and as identified by OFAC in Appendix A to 31 CFR Chapter V. The
designation identifies those parties determined to be weapons of mass destruction proliferators or their supporters as well as blocked vessels. Under Section 744.8(a) of the Regulations,2 no person may export or re-export an item subject to the
Regulations to any person designated pursuant to that Executive Order without a license from BIS. The Bradstone Challenger is powered with two U.S.-origin Caterpillar C18 engines and two Arneson surface drives, items subject to the Regulations and classified under Export Control Classification Number (ECCN) 8A992.g. Because it contains greater than a 10 percent de minimis of U.S.-origin items, the Bradstone Challenger is also subject to the Regulations if proposed for export or re-export to Iran and is classified as ECCN 8A992.f. According to publicly
available sources, the Bladerunner 51 has top speeds from 55 knots to in excess of 65 knots (or 74 miles per hour). No license was obtained from BIS for export or re-export of the U.S.-origin parts contained within the powerboat, nor the vessel itself.
Nonetheless, BIS has produced evidence that TSS is purchasing the powerboat, which is intended to be sent from Durban, South Africa. Icarus Marine is attempting to send the Bradstone Challenger to Iran. TSS is believed to be purchasing the Bradstone Challenger for use by the IRGC Navy. There is publicly available evidence of prior dealings between the two entities. The TSS Web site, under its ‘‘About Us’’
section, lists an affiliate of Icarus Marine as a company with whom TSS has had
‘‘prosperous cooperation.’’ In this transaction, Icarus Marine is attempting to send the Bradstone Challenger from the port in Durban to Iran on the IRISL vessel Diplomat, with the end-user to be the IRGC Navy. Multiple public sources indicate that Iran and its military have invested substantially in developing its naval forces. The IRGC Navy has been involved in enhancing its asymmetric naval warfare capabilities. These capabilities include exploiting enemy vulnerabilities through the use of ‘‘swarming’’ tactics by well-armed small boats and fast-attack craft, to mount
surprise attacks at unexpected times and 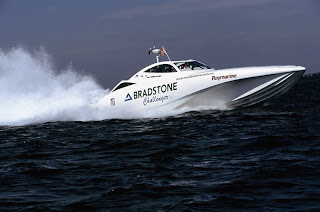 places. Accordingly, BIS has a significant concern that the vessel will be utilized by the IRGC as a fast attack craft. According to published reports, similar vessels have been armed with torpedoes, rocket launchers, and antiship missiles.

More on the Bladerunner 51 here:

The all new Bladerunner 51 is the current flagship model to the Bladerunner Series. Powered by twin 1000hp Caterpillar C18 inboard engines combined with a pair of Arneson surface drives, with a top speed in excess of 65 knots (74 mph) in full leisure format, the all new Bladerunner 51 is one of the fastest luxury high performance sports cruisers in production in the world today. In late 2005, this remarkable boat smashed the Round Britain World Record in an astonishing 27hrs and 10mins at an average speed of 63.5mph, proving its astounding offshore capabilities.

Bladerunner is an ‘Air entrapment monohull’ or AEM

Pioneered by ICE Marine the AEM is radically different to a conventional monohull, with dramatic twin tunnels that flare out either side of the extremely slender twin stepped hull finishing with sharp knife like sponsons at the sides.