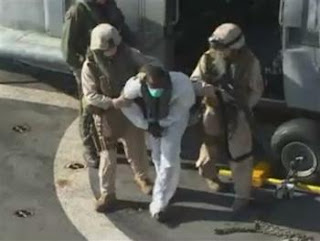 USS Vella Gulf stays active with the arrest of another nine Somali pirates in the Gulf of Aden, as reported here:

The guided missile cruiser USS Vella Gulf intercepted and caught nine suspected pirates after the crew of the Indian-flagged Motor Vessel Premdivya said it had been fired on and people were attempting to board their vessel, the Navy said.

In a similar incident Wednesday, the Navy seized seven suspected pirates. It was taking them to Kenya under an agreement that the African nation will prosecute pirates from lawless Somalia.

Pentagon spokesman Bryan Whitman said officials are gathering more information and evidence on Thursday's incident so they could turn the suspects over to authorities for prosecution, most likely also to Kenya.

In Thursday's capture, the skiff of suspected pirates stopped fleeing after a helicopter crew from the Vella Gulf fired two warning shots. The skiff was searched and some items were seized, but Whitman did disclose what they were. Weapons, including rocket-propelled grenades, were also found, he said.

The suspected pirates were taken to the supply ship USNS Lewis and Clark, which now has all 16 captured Wednesday and Thursday.

I don't know what the daily or bag limits are on Gulf of Aden pirates, but some of these suspects are getting their first helicopter rides, perp walks and beans and rice at U.S. taxpayer expense as Lewis and Clark loads up before sending this "foot soldiers" in the pirate war off to Kenya for trial. The bigger fish are safely ashore, though bagging enough low level pirates will slow the growth of their pocketbooks in time - as will a shortage of small boats and motors which, I presume, are also being bagged. AK-47s and RPGs are too plentiful to have much impact . . .

I assume the face masks worn by all are to make sure no one trades bad germs or viruses . . .

UPDATE: The weather must be better in the Gulf of Aden - Spain report busting up an attempted pirate attack: 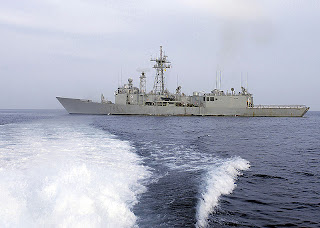 A Spanish warship Thursday foiled an attack by pirates on a merchant ship in the Gulf of Aden off Somalia, the defence ministry said.

It said a helicopter from the frigate Victoria, participating in the European Union's new task force in the region, fired warning shots at the pirate vessel.

The Victoria first received an alert from a Cypriot-registered bulk carrier, the Jolbos, on Thursday afternoon saying it had come under attack from pirates, the ministry said in a statement.

The helicopter pilot then contacted the crew, who said their vessel had come under rocket fire but that they had taken evasive action to avoid the pirates.

The pirates then approached another merchant ship, the UAE-registered Dubai, but were scared off by warning shots from the helicopter, the statement said.