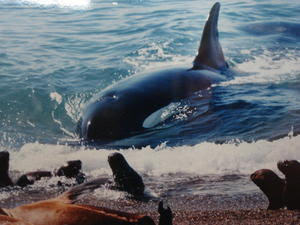 Ah, nothing like a Weekly World News story. This time its not space aliens mating with Big Foot, but rather details on a secret weapon allegedly employed by the Egyptians (who are probably wondering how WWN broke the news before Senator Feinstein) all as set out in "Whales Take Down Somali Pirates":

Somali privateers operating in the Indian Ocean have been robbing trade ships in the region and taking hostages, sometimes with political overtones. Egypt has responded with an elite fighting force of ramming whales trained to neutralize the vessels through headlong collisions.

So far, the unit of whales—code-named Moby Hit—has successfully engaged Somali pirate ships on at least four occasions, although some information surrounding their operations remains classified. But it seems clear enough that the whales are unstoppable commandos of the deep.

“They’re not human!” wailed a captured Somali pirate, after an engagement that left his ship a wreck and his crew prisoners. “I mean, I know they’re not human, but like…I mean it in the superlative sense, like they’re not bound by human limitations.”

“It’s an expression,” the man intoned dully as he was led away by Egyptian authorities.

The whale trainers, a best-and-brightest team culled from marine parks all over the world, are as rigorous in their standards as they are unwavering in their pride.

Photo shows a killer whale practicing its pirate nabbing technique on some sealions.