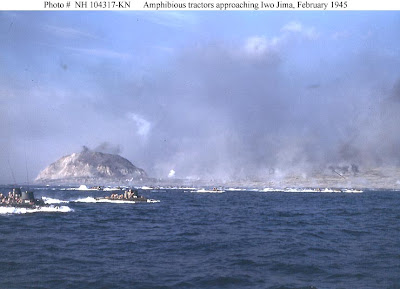 Today is the 64th anniversary of the U.S. Marines landing on Iwo Jima kicking off a battle that has become legend:

More than 450 ships massed off Iwo as the H-hour bombardment pounded the island. Shortly after 9 a.m., Marines of the 4th and 5th divisions hit beaches Green, Red, Yellow and Blue abreast, initially finding little enemy resistance. Coarse volcanic sand hampered the movement of men and machines as they struggled to move up the beach. As the protective naval gunfire subsided to allow for the Marine advance, the Japanese emerged from their fortified underground positions to begin a heavy barrage of fire against the invading force.

The 4th Marine Division pushed forward against heavy opposition to take the Quarry, a Japanese strong point. The 5th Marine Division's 28th Marines had the mission of isolating Mount Suribachi. Both tasks were accomplished that day. 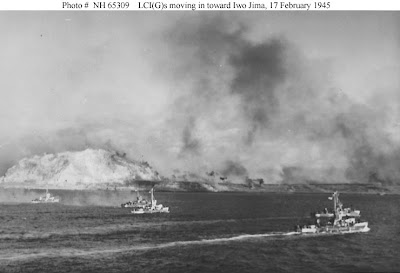 As part of the prep for the landing, small gunboats, LCI(G)s, took part in the bombardment of the island and paid a price:

Many more dead and wounded would follow. Honor the fallen.