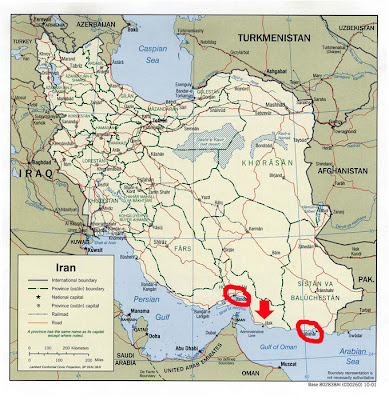 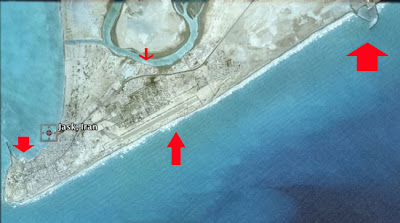 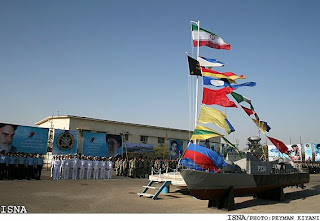 Iran has deployed naval ships to the high seas as part of a full-fledged campaign initiated by the highest level of government.

Iranian Rear Admiral Habibollah Sayyari on Friday indicated that Tehran had overcome the self-imposed barrier of warship deployment in its own territorial waters to establish a powerful naval presence in international waters.

"We have a right to have a naval presence in international waters. Our initiative will work to protect the national interests of the Islamic Republic and will hoist the Iranian flag with pride," explained the navy commander.

Ordered by Leader of the Islamic Revolution and Iran's Commander-in-Chief Ayatollah Seyyed Ali Khamenei, the newly-launched initiative will ensure that Iranian warships remain stationed in a large area of the Indian Ocean.

Iran in late 2008 opened a naval base in the eastern part of the strategic Hormuz waterway. Military officials then described the base as a protective barrier against enemy infiltration at the main entrance to Iranian waters.

Dubbed as a "defense front", the Jask base was said to be part of plans to make the area "impenetrable" for a non-regional enemy.

Rear Adm. Sayyari said Friday that the Jask naval base plays a major role in the new push into high seas.

"With this presence, we seek to convey the message of peace and friendship of the Iranian nation to the entire world, to help instruction and to pass on our experiences to our young generation," he continued.

According to the official, Iran is working on further strengthening its presence in international waters by improving its naval infrastructure and adding new destroyers to its fleet.

An Iranian warship has already ended a one-month mission in the Indian Ocean as part of the initiative.

On the map above, the arrow points to the Jask area, and the circles indicate other Iranian naval base locations. Google Earth image arrows point to locations of potential interest, as discussed below.

Iran announced the opening of its Jask base in October:

Describing the port of Jask as the main entrance to Iranian waters, Brig. Gen. Moussavi said the new naval base would act as a protective barrier against enemy infiltration.

The Iranian commander added that the country's Armed Forces have set up an 'impenetrable naval barrier' in the eastern parts of the Strait of Hormuz and the Sea of Oman.

Moussavi also stressed the need for the expansion of Iran's military bases, arguing that, "In the past, our military had to brace itself for countering regional enemies. This is while today we are faced with extra-regional threats."

An assessment of Jask's role here:

Jason Alderwick, a naval expert at the International Institute for Strategic Studies, said Jask would offer some important advantages.

"It is in a better position strategically than Bandar Abbas," Alderwick said. "It has access to the Arabian sea, so there is deep water access straight away. It has a commanding position vis-à-vis access to the straights, being forward, to the east for them. The real question is what forces are going to be based there? At this stage it's unclear what the Iranians are going to station there, for example, if they want to re-site their submarines there. That would be significant."

Lee Willett, the head of maritime studies at the Royal United Services Institute, said the mere announcement of a new base could be an end in itself. "The cynic would say that any time Iranians say something about the Gulf the oil prices go up, and they are oil exporters, so they are going to make some money," Willett said.

Upper photo is from the Jask base opening ceremony with "frigate" P224 from here. P224 is a Sina-class missile boat, a reverse engineered French design equipped with Chinese missile (C-801) and radar:

The Sina "frigate" at 350 tons is not a frigate in the commonly used meaning of that word. The "Sina-1" is in service; it is a near duplication of the old La Combattante II's Iran operates; but from the outset with Chinese C-802 missiles, Chinese diesels, and less elaborate EW systems. 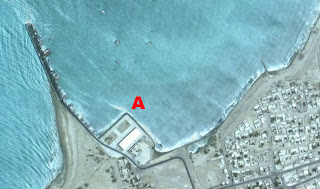 Google Earth images of Jask reveal - well- not much. First a view from 50,000 feet, arrows point to places of interest. Image with "A" shows a breakwater with small craft moored along it and at anchor. 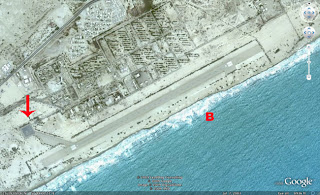 Image "B" shows airfield with one runway and arrow points to helicopter pad. 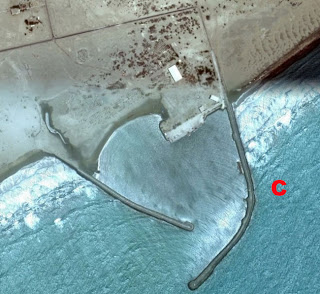 Image "C" is of some interest as it appears to be a newer breakwater protected port. 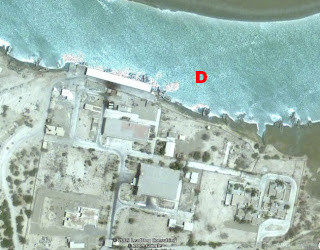 Image "D" is a facility on a river with lots of small craft about.

Below are some images of Iranian naval vessels including a C-802 launch. 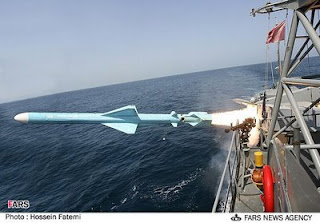 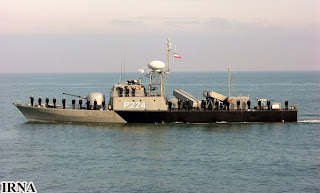 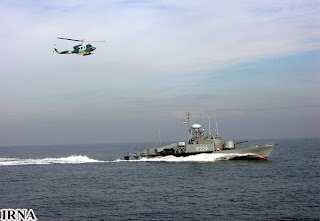 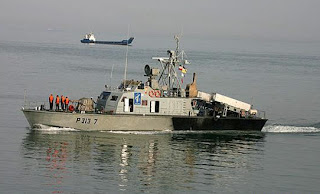 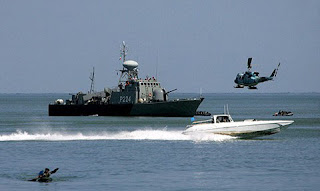 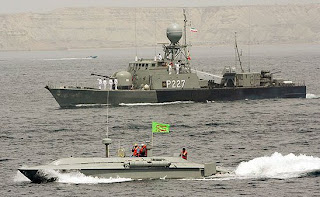