The merchant ship full of tanks and ammo has been freed, according to this report:

Early on Thursday groups of pirates began leaving the vessel, reports from Haradhere said. Representatives of the pirates then told journalists that the ship had been freed.

"We have released MV Faina. There were only three boys remaining and they delayed the release for one hour, but now the ship is free," one of the pirate leaders, Sugule Ali, told AFP news agency by phone. 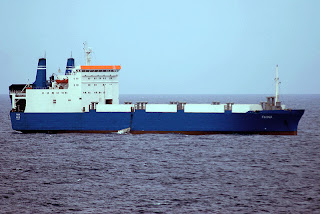 "No huge amount has been paid, but something to cover our expenses," he added

The crew - 17 Ukrainians, two Russians and a Latvian - were healthy and safe, a statement from the Ukrainian presidency said, and the ship would head to Mombasa under the protection of the US navy.

A number of warships from foreign navies had been diverted to the area to monitor the situation, in part to ensure that the cargo of weaponry did not get into the hands of Somali insurgents.

Once the ship is under way, the focus is likely to shift to its cargo of weapons and its final destination, reports the BBC's Peter Greste from the Kenyan capital, Nairobi.