The government of Sri Lanka has been engaged in a major push against the Tamil Tiger rebels. As part of that offensive, government forces have located some Tiger underwater gear, as reported here:

Troops have recovered LTTE marine equipment including 20 diving kits and 3 underwater scooters. They were found by the 58th division commanded by brigadier Shavendra Silva in the area of Ampalavan and Pokkanai to the north of Puthukudiyiruppu. This is the first recovery made by the soldiers of LTTE marine equipment. Security forces believe that these equipment were to be used either for LTTE leaders to escape or for the use of suicide attacks.

Tamil Tiger suicide attack have been a model for other radical groups, including their use of suicide bomb belts. The "Sea Tiger" maritime portion of the group has engaged the Sri Lankan Navy in pitched sea battles and bombed ships in harbors. The equipment captured would support covert insertion of underwater attack units.

More here from the Sri Lankan Ministry of Defense: 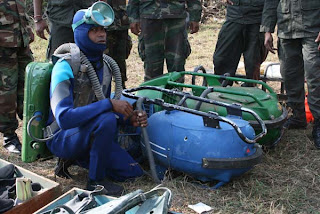 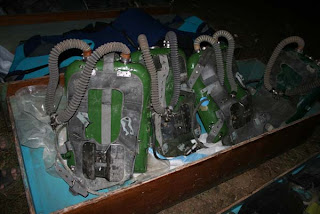 Nearly 5 hours long fighting between troops of 6 Gemunu Watch (6GW) and terrorists ensued in the area before troops captured these items, defence sources in battlefront said.

Two underwater scooters, Oxygen cylinders in various capacities, modern diving kits, sniper weapon and many other diving equipments were among the items uncovered.

Pictures are from that site and appear to me to show rebreathing diving gear and one man sea scooters. Not fancy, but capable.
Posted by Mark Tempest at 2/20/2009 08:36:00 AM