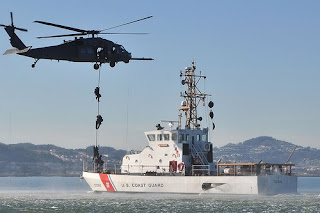 In what looked like one of those action movies on late-night television, the Coast Guard showed off its new weapon Monday in a simulated air-and-sea, small-boat gunbattle in the choppy and windy San Pablo Bay in a training exercise.

Two small black boats, manned by crews dressed all in black and carrying simulated rocket-propelled grenades, were intercepted by an orange-colored Coast Guard H-65C Dolphin helicopter. The sinister-looking black boats were "playing the role of the adversary," a Coast Guard officer said - pretending to be terrorists on a raid against a cruise ship, a tanker or one of the bay bridges.

The Coast Guard helicopter was out to stop them. The black boats twisted and dodged, throwing up clouds of spray, and the helicopter swooped down on them like a bird of prey. A marksman aboard the copter fired blank rounds, the sound echoing across the water: rata-tat-tat.
***
"The terrorist raiders in Mumbai in November came by sea," said Cmdr. Sam Creech, the officer in charge of the Coast Guard's Air Station San Francisco.

"An attack by a small boat on a cruise ship, or a tanker, or one of the bridges here could be devastating."

The Coast Guard's biggest fear is terrorists on a small boat coming out of a marina and firing a missile at a cruise ship carrying thousands of passengers, or a loaded tanker, causing a huge oil spill.

Or an attack on one of the famous bridges - "hitting an icon like the Golden Gate Bridge, for example," he said - "could cause a lot of damage to the American psyche."