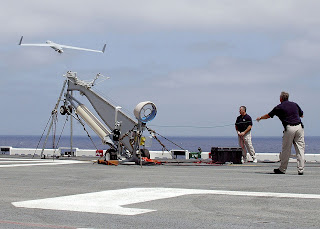 Scouting for the fleet is job of vital importance for naval forces - knowing what lies ahead and where potential threats lie is vital to safety and operations. With the use of Unmanned Aerial Vehicles (UAVs) from smaller surface combatants, the "eyes of the fleet" reach further and see more. This scouting ability is being refined off the coast of Somalis, as the USN forces assigned to anti-piracy task force 151 deploy their UAV assets.

For example, here's an interview with a U.S. Navy UAV operator as UAVs join in the pirate fight from here:

The unmanned aerial vehicle (UAV) capability aboard USS Mahan (DDG 72) provides the capability to pace emerging threats during its counter-piracy mission and perform missions in a more efficient and effective manner throughout its expected service life.

"Mahan is the first [guided missile] destroyer to deploy with a UAV system fully integrated into the ship's combat systems," said Intelligence Specialist 1st Class Danielle Fournet, one of Mahan's UAV imagery analysts.
***
"The UAV's mission supports the ship's mission as part of CTF 151," said Fournet. "It supports the counter-piracy mission by providing maritime surveillance and cueing on suspicious activity."
***
Watchstanders in the operations center of the ship believe it is evident that equipping the ship with an integrated UAV system makes it a technologically advanced hub of modern warfare on the tip of the spear with significant surveillance and monitoring capabilities.

"The UAV provides invaluable cueing that is used by the operations personnel [and CTF 151 staff] to station associated surface assets," explained Fournet. "It is versatile and very responsive, able to change operating areas and change missions in mid-flight."