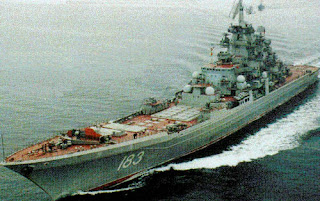 A Russian warship has captured three pirate vessels off Somalia, news agencies quoted the Russian navy as saying on Friday.

The nuclear-powered warship, Peter the Great, also detained 10 pirates on the boats, Interfax news agency quoted a spokesman for the Russian navy as saying.

UPDATE:More here, including what I think is a mistranslation of pirate weaponry:

The pirates had been spotted by the cruiser's helicopter southeast of the Yemeni island of Socotra in the Indian Ocean, the spokesman told AFP.

"It was visually established how weapons were being dumped from the boats into the sea," Dygalo said in a separate statement.

He added that the navy managed to confiscate grenade launchers, automatic rifles, landmines and 500 grammes of a "narcotic substance," among other things.

As set out here, pirate activity has increased (with the release of ships more pirates are available and the weather has eased making it easier on the pirates), but of 6 attempted attacks, all failed:

"In the past two days, pirates have been actively attacking vessels with intent to hijack," Noel Choong, head of the International Maritime Bureau piracy reporting centre in Kuala Lumpur, said in a statement.

"It appears that favourable weather conditions in the area and the high number of hijacked vessel that have been released recently may have prompted the pirates to actively seek for new targets," he added.

But the ships -- managed by Indian, British, Greek, Singapore and Philippine companies and one unknown -- managed to escape from the pirates.

"The number of successful hijackings has been reduced due to naval activities," he told AFP.
***
Choong said since January 2009, there had been 22 attacks, with seven vessels and 123 seamen being held by Somali pirates.

A Japanese ship has been released by pirates, as set out here:

The ship's crew of 18 Filipinos and five South Koreans are unharmed.

Ecoterra said the last pirates left the ship at 10.30pm (1930 GMT, 3.30am Singapore time) after a ransom was delivered to the vessel by a tug-boat.

The MT Chemstar Venus is owned and managed by the Japanese company Iino Marine and carries some 20,000 tonnes of oil products.

The latest release brings to at least 11 the number of foreign vessels still held by Somali pirates. A total of more than 170 seamen are held hostage.

Japan and Singapore naval vessels are expected to join the international naval forces operating in the Gulf of Aden. Turkey has authorization to send warships.
Posted by Mark Tempest at 2/13/2009 06:44:00 AM