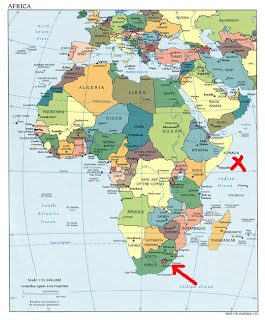 South Africa's Navy will be getting involved with African piracy matters, as set out here:

South Africa's navy could be escorting billions of dollars worth of cargo through treacherous East African waters within weeks as attacks by pirates around the continent continue to escalate.

This was revealed on Friday during a media briefing by the South African National Defence Force's joint operations division in Pretoria.

In scenes reminiscent of convoy escorts during World War 2, the South African Navy could soon be involved in patrolling and escorting hundreds of vessels off the coast of Somalia and the rest of the continent's eastern coastline.

It is believed that South African ships would escort vessels from South Africa's territorial waters into Somali waters where other navies, currently patrolling those seas, would take over the escort duties.

It is believed that South Africa is being requested to escort ships between South Africa and Somalia because of fears that the attacks could move further south.

In June, the UN Security Council adopted a resolution allowing ships from foreign nations that co-operate with the Somali government to enter Somali territorial waters "for the purpose of repressing acts of piracy and armed robbery at sea".

Very interesting, as the loose ends are being tied up - limiting the safe areas for Somali pirates to operate in.