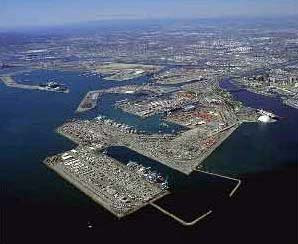 The center, which sits on a narrow strip of land within the harbor, controls an assortment of cameras, motion sensors, and security teams that monitor the port's 3,200 sq. ft. and acts as a fusion center for hundreds of local, state, and federal agents that provide security for America's second biggest port, according to the Press-Telegram (of Long Beach).

Some of the port's 115 cameras are so powerful, operators can read the badge number of someone standing two miles away, said Cosmo Perrone, the port's director of security. Other cameras are armed with facial recognition technology, reports the BBC. The most technologically advanced cameras cost $80,000, paid for by federal funds.

But the most astounding feat may be the port's access to private surveillance networks from other organizations and businesses.