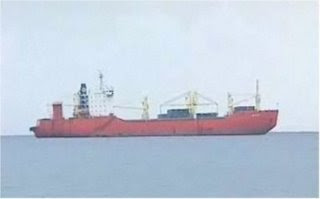 Remember that ship alleged to be carrying Iranian arms to Gaza? See here for a refresher. The government of Cyprus, having availed itself of UN advice, has decided to unload the ship (and presumably let the ship go), as set out here:

Cyprus has begun to unload a detained ship allegedly carrying weapons-related material, which the government says was in "clear" breach of UN sanctions.

The government said the unidentified cargo would be stored on the island.

The containers were being transported to a naval base along the coast under heavy police guard, state radio said.

Israel says the ship, the Monchegorsk, was carrying Iranian arms destined for the Palestinian militant group, Hamas, in Gaza. Iran denies the accusation.

Iranian Foreign Ministry spokesman Hassan Ghasghavi stated on Wednesday: "The ship was not taking arms and weapons [to Gaza]."

Cypriot authorities had inquired about the ship's cargo and "if it was carrying weapons things would have been clear", he added.
***
Later, Defence Minister Costas Papacostas told the Associated Press: "There are no weapons. There is material that could be used in the manufacture of munitions."

On Tuesday, Cypriot Foreign Minister Marcos Kyprianou said the UN committee had ruled that the Monchegorsk was in "clear" breach of UN sanctions, but he did not specify what had been found on board or name the cargo's destination.