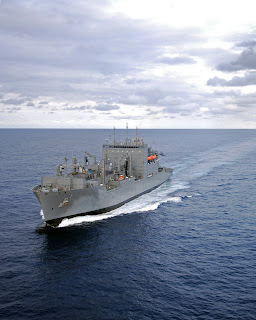 A Military Sealift Command ship, USNS Lewis and Clark has been adapted for pirate fighting, according to this:

A civilian cargo ship drafted by the U.S. Navy to fight high-seas piracy has been equipped as the first U.S. vessel that can temporarily hold captured suspects, officials said.

The USNS Lewis and Clark, usually used to haul cargo and ammunition, has been reconfigured to hold as many as 26 suspected pirates — signaling a paradigm shift in the Navy’s counterpiracy missions, which previously did not allow for the capture of such suspects.

An agreement between the U.S. State Department and the Kenyan government signed in mid-January supplied "the missing link" that now lets U.S. military and coalition nations capture suspected pirates and then turn them over to Kenya for prosecution, said Lt. Nathan Christensen, a spokesman with U.S. Naval Forces Central Command/5th Fleet.

The Lewis and Clark joined Combined Task Force 151 as "a staging platform," from which the Navy can launch either of the SH-60 Navy helicopters now assigned to the ship, or serve as a temporary holding center for suspected pirates.

Currently, no one is being held onboard.

The ship’s crew, reduced from 158 to 118 civilian and military mariners to accommodate its new mission, reconfigured part of the ship as a holding area. Crews set down matting and blankets, and the ship’s steward set aside foods like rice and beans, the ship’s master, civilian mariner Capt. William McCarthy, said Monday in a phone interview.

"Although this mission is unique, it’s not unique to support a military operation," McCarthy said. "Military Sealift Command operates ships around the world, and we’re quite frequently asked to support military missions."

I assume that representatives from People for the Ethical Treatment of Pirates or some such group will be up in arms about a diet of rice and beans.
Posted by Mark Tempest at 2/09/2009 07:47:00 PM