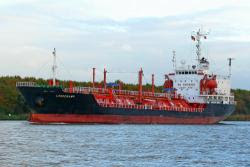 Thanks to Fred Fry for forwarding this to me: Longchamp 'not registered for EU protection':

While the vessel’s operator, Hamburg-based Bernhard Schulte Shipmanagement, had access to the transit schedule via the EU Navfor website, the 4,316 dwt Longchamp was not expected by EU naval commanders overseeing the operation.

”While the ship was in the corridor, it was 20 miles behind the transit,” a Navfor spokesman said. “The company was registered with us, but the vessel was not.”

The spokesman, who asked not to be named, said the vessel would have been considered high risk had operators notified Navfor, headquartered in Northwood, England. “We grade ships according to risk.

Given the Longchamp’s low freeboard and cargo of LPG and chemicals, it would probably have been considered a higher risk,” he said.

EU Navfor is operating with a fleet of around four frigates in the Gulf of Aden region, one of which is dedicated to World Food Programme vessels. Companies which succeed in registering with the Navfor website - around half are approved for access to the restricted area - receive information on transit points, times and speeds.

EU frigates do not necessarily accompany vessels through the transit corridor, hence Navfor’s reluctance to define the transits as convoys. “But if we know where they are we can keep an eye on them,” said the spokesman. “If everybody is blobbed together they can all help each other.”

Initial report of capture here, according to which the ship was somewhat under the eyes of the Indian and Chinese navies, if not the EU force.
Posted by Mark Tempest at 2/04/2009 08:18:00 AM