Reported here, the tanks and other military equipment on board the recently pirate-held vessel MV Faina has been unloaded from the ship and onto rail cars:

The MV Faina cargo have been fully loaded on rail wagons ready for onward transfer to the Kahawa Barracks in Nairobi.

Sources say the cargo is awaiting an official flag off to start the trip anytime later Tuesday or early Wednesday. 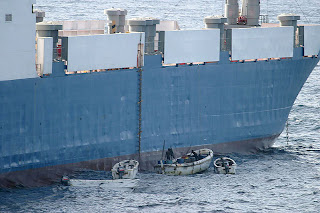 Military officials, led by Colonel George Kabugi, Deputy Commander of the Kenya Army Armoured Brigade, told journalists that they were happy to receive the cargo.