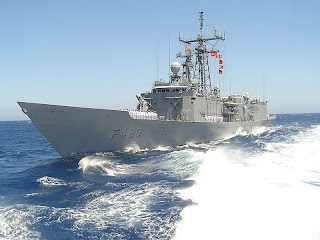 The Republic of Turkey has dispatched a Perry-class frigate to the Gulf of Aden to go pirate hunting as part of CTF-151, as reported here:

TGC Giresun, with two helicopters and 263 men on board, is expected to arrive in the region in "four or five days" and begin its duty on Feb. 25, its commanding officer Cenk Dalkanat was quoted by news agencies as saying at the Aksaz navy base on the Mediterranean coast.

It will serve for four months in the new counter-piracy multinational task force, CTF 151, operating in and around the Gulf of Aden, Arabian Sea, Indian Ocean and the Red Sea, before being replaced by another frigate.

The Turkish parliament last week gave the government a one-year authorization to send ships to the Gulf of Aden to combat rampant piracy in the region.