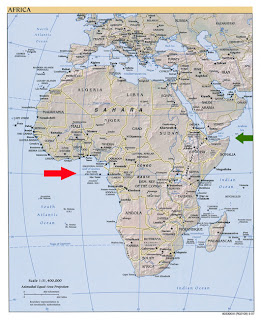 The United States and other international partners are helping African governments confront piracy and improve maritime security on two coasts of Africa. While the waters off the coast of Somalia rank number 1 in the world for piracy and armed robbery at sea and the Gulf of Guinea on Africa’s west coast ranks closely behind in the number 2 spot, the two regions have different scenarios and different types of crime.

Jun Bando, the maritime security coordinator and U.S. Africa Command liaison for the State Department’s Bureau of African Affairs, made that point February 19 in an interview with America.gov.

Looking at the problems in the two regions, Bando said, “What we are seeing off the coast of Somalia [is] ... acts such as ship hijacking, which is often committed on the high seas or international waters. In the Gulf of Guinea, the balance leans toward criminal acts that happen within a country’s territorial waters.”

In the Gulf of Guinea, Bando said, “We are seeing hijackings, kidnappings, considerable levels of violence” in criminal acts that are “typically more violent than what we are seeing in the Horn of Africa.”

Small armed groups in the Gulf of Guinea tend to commit their crimes along the coastline, offshore and on offshore oil rigs as well.

“We have seen an increase in attacks” in the Gulf of Guinea, she said. “We are seeing a number of criminal activities that are happening not only in international waters but also within the territorial waters of countries, and involving everything from drug smuggling to trafficking in both arms and persons.”

Turning to the situation off the coast of Somalia, Bando said there “the international ‘actors’ have come to play a very visible role in combating piracy.” That, she said, “is a reflection of several factors, the most important being that Somalia has not had the capacity to deal with the situation on its own and has asked the United Nations Security Council for help.

“If we are talking about the Gulf of Guinea, it is a very different scenario where certainly international cooperation has a role to play” in prevention, she said, “but it would be hard to envision the same type of international reaction that we would see off the coast of Somalia” because there are governments in the Gulf of Guinea capable of acting, although they may require technical or other support.