al Qaeda Plot in the Caribbean? 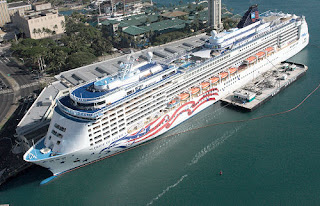 Have British intelligence agencies uncovered an al Qaeda plot to blow up a cruise ship somewhere in the Caribbean? Says so here:

The plot was uncovered on a jihadist website which British and American security services have been monitoring since early this year.

The terror plan echoes an al-Qaeda attack on the US warship Cole in Yemen in 2000.

Terrorists loaded a small boat with explosives and blasted a 12-metre hole in the ship's hull, killing 17 crew.

MI6 foiled a plot to blow up British ships off Gibraltar in 2002. Al-Qaeda's plot to target a cruise ship may also have involved terrorists getting jobs as crew members.

Fellow fanatics would then book cabins as passengers and link up with the rest of the group once at sea.

They could scuttle the ship by opening underwater hatches or start a disastrous blaze in the engine room. Some of the world's biggest cruise liners were picked as possible targets.