D-Day: The Things They Fought For 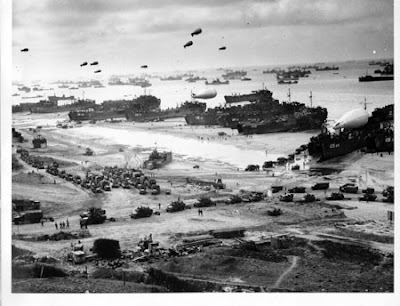 Yes, it's the the 64th anniversary of the Allied Invasion of Europe.

While we honor those who fought and died on French beaches, let us remember what kind of republic they left to us. Remember the men on the beaches, fighting to free Europe from the iron fist of a dictator whose intolerance led to the deaths of millions. Read their legacy in Peggy Noonan's words on the Barrack Obama victory here:

A great old-school bulletin, and of course it carried a huge and moving message. It is good when barriers fall; it's good when possibilities seem to open up to more people, especially the young, who are always watching. (That's what's wrong with them, they're always watching, and we're always doing terrible things, like, say, not congratulating the winner on the night he won.)

But what I thought of when the friend sent the flash was something another friend told me months ago. It was the night Mr. Obama won Alabama. My friend was watching on TV, in his suburban den. His 10-year-old daughter walked in, looked, saw "Obama Wins" and "Alabama." She said, "Daddy, we saw a documentary on Martin Luther King Day in school." She said, "That's where they used the hoses." Suddenly my friend saw it new. That's the place they used the water hoses on the civil rights marchers crossing the bridge. And now look. The black man thanking Alabama for his victory.

What kind of place makes a change like this? Only a great nation. We should love it tenderly every day of our lives.