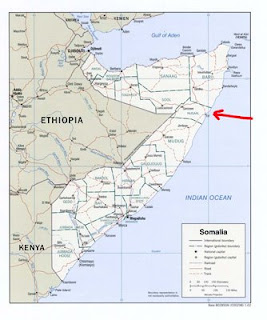 Somali pirates may have gained some allies in their lucrative ransom racket, according to this:

Abdullahi Said O'Nur, the mayor of Puntland's coastal town of Eyl, said the security situation and the local economy have been adversely affected by the arrival of hundreds of soldiers.

The Mayor, who is currently in the Puntland capital of Garowe, told Radio Garowe during a Thursday interview that 400 soldiers backed by armored trucks had arrived in Eyl in recent days.

"I appeal to the ship's owners not to pay any ransom," Eyl Mayor O'Nur said, while addressing the fate of MV Amiya Scan, a Dutch-owned with a nine-member crew of Russians and Filipinos on board.
***
Insiders linked the arrival of hundreds of Puntland soldiers in Eyl to Puntland President Adde Muse's recent declaration that the regional authority lacks the resources to pay for the services of its employees, including members of the security forces.

If true, and it makes sense, then cleaning up the Somali pirate problem probably is just a little harder than it was last month.
Posted by Mark Tempest at 6/06/2008 06:43:00 AM