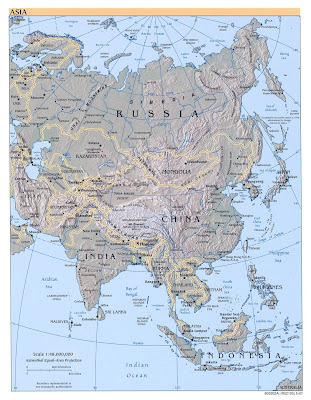 Well, The Economist wonders if an Asian naval arms race is developing in this piece

India shares China's concern that, as trade volumes and energy consumption soar, its security is vulnerable to any disruption of sea traffic.
***
Tim Huxley of the IISS says that with so much attention focused on China and India, the naval expansion of other Asian countries is often overlooked. Yet several, especially South Korea, are also building long-range naval capabilities. Besides new submarines and destroyers, the South Koreans, like the Japanese, are commissioning helicopter-carriers.

Is this an arms race? As Asia's defence ministers and military chiefs gathered in Singapore last weekend for their main annual summit, the Shangri-La Dialogue (organised by the IISS), the conclusion of most analysts seemed to be: not yet. A classic arms race, says Mr Huxley, consists of two main countries that have one dominating dispute. Asia is different. Instead, it has the makings of a pair of opposing alliances. A “quad” group (India, America, Australia and Japan) plus Singapore now conduct naval manoeuvres together. So do China and Pakistan. But China and India seem keen to avoid provoking each other. Indeed, they are seeking to build good relations between their navies.

Military chiefs at the summit insisted they were not seeking an arms race and gave various justifications for all their new warships. Rather implausibly, China and others insisted they were mainly to ward off pirates and terrorists. South Korea's defence minister, Lee Sang-hee, said North Korea's navy threatened its maritime supply lines...

As Robert Heinlein once wrote: "An armed society is a polite society." Some sort of reasonable naval balance among neighbors may actually help to keep the peace.
Posted by Mark Tempest at 6/06/2008 06:57:00 AM