The latest ONI WorldWide Threat to Shipping Report (to 4 June 08) can be found here.Highlights:

3. NIGERIA: MEND claims responsibility for attack on Shell facility, soldiers reportedly
killed 26 May 08 at 0100 local time, Awoba flow station in Degema Local Government Area of
Rivers State. According to the MEND, they successfully sabotaged another major trunk pipeline
belonging to the Shell Petroleum Development Company. An attack was confirmed on Nembe
Creek pipeline at Awoba and production has stopped because of an oil spill in the area according
to a Shell spokesman. The MEND claimed that after the sabotage, their fighters encountered a
military gunboat and reportedly killing all 11 soldiers in close quarter combat. They also
claimed to have collected their weapons, ammunition and bullet-proof vests before using
dynamite to sink the gunboat with its dead occupants, both of which were strongly denied by a
Joint Task Force spokesman (LM: allafrica.com, AFP).
***
5. NIGERIA: Oil ship (LOURDES TIDE) hijacked 13 May 08, evening, near Port Harcourt.
The vessel, which ferries supplies for the oil company Chevron, was sailing from Onne port in
Port Harcourt, Rivers State, to Escravos in Delta State when gunmen boarded and hijacked the
vessel. The militants are reportedly demanding a ransom of 30m naira (approximately
$259,000USD) for the boat and the crew of 11. Chevron confirmed the attack and reportedly
promised to assist in the release of the hostages. The MEND has stated they were not
responsible for the attack. No one has claimed responsibility (AFP, BBC, IMB).
***
20. SRI LANKA: Sri Lankan military sinks LTTE vessels 29 May 08, off the northern
coast. Sri Lanka’s military sank three to four Tamil Tiger rebel boats in a pre-dawn attack and
stated that eight rebels and one soldier was killed, and two soldiers were wounded, while one
solider and two sailors were missing. A military official stated that the rebel boats were sunk
when troops fired artillery at them as they attempted to attack army and naval positions in
Sirutheevu off northern Jaffna. According to Tamil.net, the rebels denied suffering any
casualties and stated that there were two civilian deaths due to an artillery fire in Jaffna, but did
not say who fired the shells (AP, LM: Bloomberg.com).
***
1. GREENPEACE: Greenpeace vessel (ARCTIC SUNRISE) attacked by fishermen, 30
May 08 in the morning, Cypriot Channel, Turkey. Three Turkish vessels surrounded the
Greenpeace ship, one collided with the (ARCTIC SUNRISE) causing superficial damage mid-
ships on the starboard side. The tuna ship's crews then started hurling lead fishing weights of
around four centimeters at the Greenpeace ship. Gunfire was heard. No one was injured but the
Greenpeace helicopter was reportedly damaged and is now inoperable. The incident was
reported to the Turkish Iskenderun Port Authority. Greenpeace was in the area to call for an end to unsustainable fishing and to call for the establishment of a marine reserve between Cyprus and Turkey (GP). 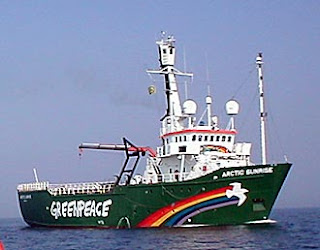