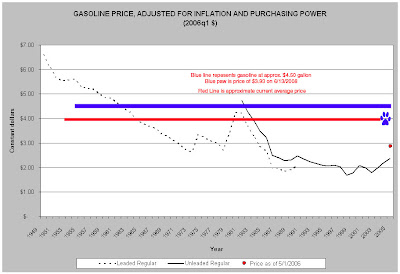 A couple of years ago, the CATO Institute performed a nice but hardly noticed public service when they published Gasoline Prices in Perspective by Jerry Taylor and Peter Van Doren, with the neat graph which I have modified slightly:

America appears to be in a state of wild-eyed panic about the rising price of gasoline. Talk radio hosts and T.V. populists apparently think that mass riots are imminent and that whole cities will burn unless politicians do something to save America from the long, dark economic night that is descending upon us.

In truth, gasoline prices today are taking less of a bite from our pocketbooks than has been the norm since World War II.
For instance, let's look at 1955, a year most of us associate with big cars, big engines, and cheap fuel – automotive glory days, as it were. Gasoline sold for 29 cents per gallon. But one dollar in 1955 was worth more than one dollar today. If we were using today's dollars, gasoline would have cost $1.76 per gallon in 1955.

Gasoline now costs around $3.00, so we are worse off than in 1955, right? No. Because we were poorer in 1955 than we are today, $1.76 then had a bigger impact on the pocketbook (that is, it represented a larger fraction of income) than $1.76 today. If we adjust gasoline prices not only for inflation but also changes in disposable per capita income (defined as income minus taxes), gasoline today would have to cost $5.17 per gallon to have the same impact as 29 cents in 1955.

Let's pick another year we associate with low gasoline prices – 1972, the year before the Arab oil embargo. Gasoline was selling at 36 cents per gallon. Adjusted for inflation, however, the price was actually $1.36 in today's currency. Adjust again for changes in disposable per capita income and the price would have to be $2.66 per gallon to have equivalent impact today.

Were we better off then when we rolled into the filling station in 1972 than we are today? No, because our cars get 60 to 70 percent better mileage today than in 1972 (22.4 miles per gallon versus 13.5 miles per gallon). That more than offsets the 10.5 percent increase in gas prices adjusted for change in inflation and income from then to now.

Now let's look at 1981, the year Ronald Reagan took office. Gasoline sold for $1.38 that year, the equivalent of $2.74 in today's currency. Adjusting for the change in disposable per capita income, prices would have to be $4.30 today to have an equivalent impact.

Click on chart to make it bigger. Adjust for inflation and increases in income since 2006.