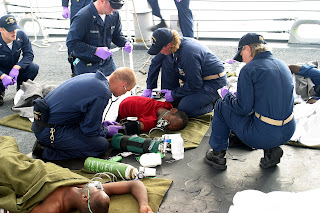 USS Russell (DDG 59) responded to a vessel in distress between Bossasso, Somalia and the Yemeni coast in the Gulf of Aden June 8.

A Combined Task Force (CTF) 150 air asset notified Russell of the small boat's distress call. Russell, operating nearby, proceeded at maximum speed and arrived on-scene to assist the vessel. The 45-foot small boat experienced serious engine problems, leaving it unable to operate at sea, and had been adrift for two days.

There were approximately 70 personnel on board the vessel, some of whom were in need of immediate medical attention. Seven personnel were transferred to Russell and treated for severe dehydration and malnutrition. The vessel was also re-provisioned for the night and Russell is towing it towards Somalia where the small boat and patients will be turned over to Somali authorities.

I hope the "Somali authorities" sort out who the smugglers are and carry out an appropriate punishment.
Posted by Mark Tempest at 6/09/2008 09:27:00 PM