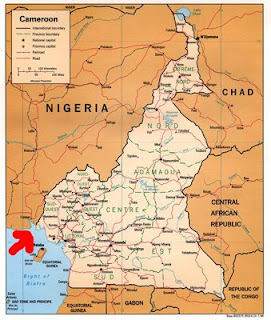 A Cameroonian official and five soldiers were ambushed and abducted by pirates on the Bakassi frontier with Nigeria in a fresh attack in the oil producing Gulf of Guinea, authorities said on Wednesday.

Cameroon's armed forces said the attack took place on Monday at Mbenmong on the long-disputed Bakassi peninsula, which Nigeria handed back to Cameroon in 2006 in line with an International Court of Justice ruling.

A sub-prefect from Kombo-Abedimo was among those abducted after the boat in which he was travelling with an eight-man Cameroonian military patrol was fired on as it approached the fishing settlement.

"Heavily-armed pirates on the shore opened a hail of fire onto the boat," the Cameroonian military statement said.

Three of the soldiers, one badly wounded, were able to dive into the water. The six other occupants of the boat, believed to be wounded, were seized by the attackers along with the vessel and their weapons, the statement added.
***
Cameroon said its security forces were investigating Monday's attack, which it called the attack an act of piracy.

"These attacks linked to international terrorism are becoming more and more frequent in African maritime areas, notably off Somalia and the Gulf of Guinea," the armed forces statement said.(emphasis added)