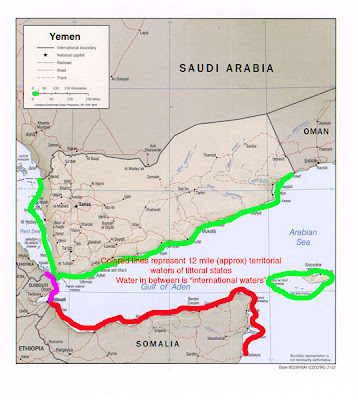 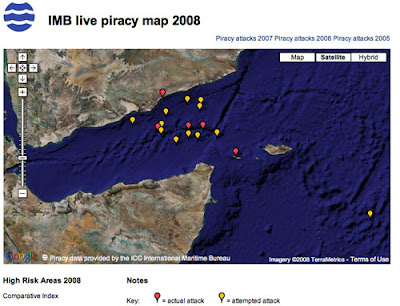 27.05.2008: 0748 UTC: 14:04.30N-049:23.72E: Gulf of Aden.
A suspicious speedboat, with five persons, was noticed proceeding towards a tanker underway. Master increased speed, took evasive manoeuvres and called the coalition forces. Unable to intercept the vessel, after about forty minutes the boat aborted and moved away. At the same time, another boat was seen crossing the bows at a distance of 3 nm.

28.05.2008: 1200 UTC: 13:43N-048:50E: Gulf of Aden.
Four suspicious high-speed boats, length about 15 meters, wooden/plastic gray hull with four persons in each boat tried to approach a tanker underway. Master took evasive manoeuvres to prevent the speedboats from approaching closer. One speedboat crossed the bow at a distance of 0.5 miles. Later, the boats aborted and moved away in a south-easterly direction.
***
28.05.2008: 1040 UTC: 13:09N - 048:58E, Gulf of Aden.
Four heavily armed pirates, in a speedboat, attacked and hijacked a general cargo ship underway. They sailed the vessel into Somali territorial waters. Further details awaited.

Take a look at the two maps in this post (clicking on them should cause them to enlarge). The First shows the Gulf of Aden with 12 mile territorial limits for the countries forming the Gulf (green is Yemen, violet Dijbouti, red Somalia -and the 12 miles is very approximate and except for Yemen, does not really include offshore islands). The ocean area in between the territorial waters is "high seas" and acts of piracy occurring there and pirates captured there are subject international law concerning pirates. Inside the territorial limits, the is no "piracy," but rather "sea robbery" subject to the sovereign law of the state owning the those territorial waters.

It is possible for an act of sea robbery to occur in Yemeni territorial waters and for the the "sea robbers" to escape from Yemeni waters and run toward Somali waters. They can be pursued by Yemeni forces up to the point where they cross into Somali territorial waters where they become a Somali issue. In the Strait of Malaaca, where the territorial waters meet in the middle of the strait, it was, before recent cooperative efforts, a frequent pirate ploy to move in and out of such waters. The other map, courtesy of ICC CCS, shows the locations of pirate attacks in 2008 in the Gulf of Aden.

Now, if I were placing and concentrating naval vessels in the Gulf of Aden for "escort" purposes, I have a pretty good idea of where I might place "chaser" and "barrier" ships to slow the pirates of the Gulf of Aden down. How about you?

8. GULF OF ADEN: General cargo ship (VICTORIA) hijacked 17 May 08 at 0905 local time while underway in position 02:13.19N-046:49.38E, 40NM off Mogadishu, Somalia. The Jordanian-flagged vessel, owned by Marwan Shipping Company, with a crew of 21, was transporting 4,200 tons of bagged sugar from Mumbai, India to Mogadishu when it was hijacked by unknown gunmen. The BBC World Service reported pirates tried to dock the vessel off Hobyo but the local residents resented their presence. Shariff Ali Guure, a member of the Hobyo Traders, told reporters that the pirates should leave the area or face confrontation. According to local media reporting, the vessel owners and Somali officials are conducting negotiations.
Marwan Shipping reported that the hijackers are demanding a ransom, but the sum was not revealed. All crewmembers are reportedly safe. As of 23 May 08, the vessel was reportedly released (IMB, AFP, AP, BBC, LM: Shipping Times UK, The Times of India, Indo-Asian News Service, Hindustan Times, nationmedia.com).
.
9. GULF OF ADEN: Container ship reported suspicious approach 15 May 08 at 0900 UTC while underway in position 13:02.6N-045:42.6E, 32NM northeast of Port Aden. Four suspicious speedboats reportedly chased the vessel. Each vessel had four people onboard. The vessels speed was about 18knts but they did not close in. Two boats sped up to 22knts and closed in. The vessel increased speed and took evasive maneuvers. Thirty minutes later, the speedboats moved away (IMB, UKTMO, Operator).
.
10. GULF OF ADEN: Tanker reported suspicious approach 15 May 08 while underway in position 15:40.8N-052:41E, approximately 59NM northeast of Qishn, Yemen. The vessel observed a high speed boat doing 24knts approaching the vessel from the port quarter. The crew on the poop deck monitored the boat which came within 1.4NM and then altered course away from the vessel. The boat was steering 315T and approached from southeast. The boat was dark blue with four persons onboard (Operator, UKMTO, IMB).
.
11. GULF OF ADEN: Tanker reported suspicious approach 13 May 08 while underway in position 12:43.1N-045:42.6E, 31NM east southeast of Port Aden, Yemen. Four speedboats were in close proximity of the vessel. Two of the speedboats were detected on the port side and two speedboats on the starboard side. The master sounded the general alarm and briefed the crew on anti-piracy precautions. Each speedboat was manned by two persons. No weapons were
observed. However, the master noticed concealed items within the boat. At 0615 UTC, the master altered its course to the starboard side. The master observed the speedboats achieve a speed of over 20kts, but were having difficulty in the wind conditions. At 0620 UTC, the two speedboats on the starboard side crossed the shipís bow and attempted to approach the vessel's port side. The master altered its course to the starboard side in order to make the port side under swell direction. The master alerted the Company Security Officer in Dubai, UAE, and announced the speedboats position via VHF ch. 16. At 0635 UTC, the vessel started to gain
distance from the four speedboats. At 0635 UTC, Marshall Islands Duty Officer was advised about the situation via telephone by the Ship Manager in Dubai. At 0640 UTC, the four speed boats altered its course to the port side, shore direction.† Master reported again the position of the speed boats via VHF Ch.16. Fortunately, the master was able to maneuver the vessel to take evasive action, thereby successfully mitigating the threat from the four speed boats, which headed back towards the general vicinity of the Yemen coast. UKMTO NOTE - This incident was investigated by UKMTO and assessed as fishing activity. The vesselís position was close to
land and in a known area of high fishing activity. On speaking to the master he told UKMTO that the two boats forward kept on the port side and seemed to force the vessel to starboard side. No shots were fired and in each of the four boats only 2 people per boat were seen (Operators, UKMTO, IMB).

UPDATE: Some Piracy Law from UNCLOS concerning the right of hot pursuit:

Article 105. Seizure of a pirate ship or aircraft
On the high seas, or in any other place outside the jurisdiction of any State, every State may seize a pirate ship or aircraft, or a ship or aircraft taken by piracy and under the control of pirates, and arrest the persons and seize the property on board. The courts of the State which carried out the seizure may decide upon the penalties to be imposed, and may also determine the action to be taken with regard to the ships, aircraft or property, subject to the rights of third parties acting in good faith.
***
Article 111. Right of hot pursuit
1. The hot pursuit of a foreign ship may be undertaken when the competent authorities of the coastal State have good reason to believe that the ship has violated the laws and regulations of that State. Such pursuit must be commenced when the foreign ship or one of its boats is within the internal waters, the archipelagic waters, the territorial sea or the contiguous zone of the pursuing State, and may only be continued ouside the territorial sea or the contiguous zone if the pursuit has not been interrupted. It is not necessary that, at the time when the foreign ship within the territorial sea or the contiguous zone receives the order to stop, the ship giving the order should likewise be within the territorial sea or the contiguous zone. If the foreign ship is within a contiguous zone, as defined in article 33, the pursuit may only be undertaken if there has been a violation of the rights for the protection of which the zone was established.

3. The right of hot pursuit ceases as soon as the ship pursued enters the territorial sea of its own State or of a third State.
***

UPDATE2: The International Maritime Organization is happy, too. I guess a couple of years of effort may be "high speed" in UN terms. UPDATE3: The UN relief agencies, who have been trying to keep Somalis alive but who have been troubled by pirates and land sharks, are also happy.
Posted by Mark Tempest at 6/03/2008 10:15:00 AM