ONI Worldwide Threats to Shipping (to 18 June 08) can be found here. Highlights: 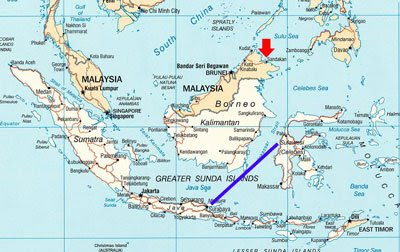 21.05.2008: Enroute from Sulawesi to Surabaya, Indonesia.
Approximately ten pirates armed with guns and knives boarded and hijacked a product tanker laden with crude palm oil. Pirates took 14 crewmembers as hostage and sailed the vessel to unknown location. Owners contacted the Piracy Reporting Centre for assistance to locate the vessel. The Piracy Reporting Centre informed all authorities in the region to look out for the vessel and liaised with them regularly. The Royal Malaysia Marine Police located and detained the vessel on 19.6.2008 at the port of Sandakan, where the vessel had discharged the cargo. Six crewmembers are reported as missing.

On the map, red arrow points to end location of vessel, blue line is guesstimated intended route before hijacking and presumed murder.
Posted by Mark Tempest at 6/24/2008 06:19:00 PM