The video below is a demonstration of a modern destroyer firing multiple rounds from a single turret.

Such fire power is useless, however, unless it can be reliably delivered on target- in the Navy this process is called "fire control." As I attempted to make clear in the first two parts of this series (Part I and Part II), the fire control issues of early warships largely consisted of getting one's own ship close enough to your opponent to exchange broadsides - a process that effectively kept the guns on the unengaged side of a war ship out of action.

With the introduction of the rotating turret on the Monitor, warships could now engage on either side without having to engage in extensive maneuvering to "unmask" guns. Given the cannon of that time, however, the process was still limited to relatively close ranges.

But the rotating turret was not the end of improvements in naval gunnery. The next big step came in the improvement of the range of the guns sent to sea, a series of steps closely paralleling improvement in land artillery.

Greater range brought new problems to naval gunnery - it was now possible to move away from "point blank" shooting into longer range attacks. However, unlike fixed artillery positions, shooting from a moving ship while trying to hit another moving ship while adjusting for increasing and decreasing range presented some new problems for ship's gunners:

Hitting a distant moving target requires observing its range and bearing, estimating its speed and direction, extrapolating into the future to compute the lead, and then calculating ballistics (that is, how to set a gun with the proper angle and elevation to hit a target at a particular range and bearing). Before the twentieth century, gunners performed these tasks manually or aided by small instruments, observing with optical telescopes and rangefinders, looking up ballistics in firing tables, and setting guns by hand.

In this part of this series, we're going to take look at these "optical telescopes and rangefinders" their effect on ship to ship gunnery.

A pretty good explanation of the problem can be found here in the words of Professor Elting Morison from "Gunfire at Sea: A Case Study of Innovation":

The governing fact in gunfire at sea is that the gun is mounted on an unstable platform, a rolling ship. This constant motion obviously complicates the problem of holding a steady aim. Before 1898 this problem was solved in the following elementary fashion. A gun pointer estimated the range of the target, ordinarily in the nineties about 16oo yards. He then raised the gun barrel to give the gun the elevation to carry the shell to the target at the estimated range. This elevating process was accomplished by turning a small wheel on the gun mount that operated the elevating gears. With the gun thus fixed for range, the gun pointer peered through open sights, not unlike those on a small rifle, and waited until the roll of the ship brought the sights on the target. He then pressed the firing button that discharged the gun. There were by 1898, on some naval guns, telescope sights, which naturally greatly enlarged the image of the target for the gun pointer. But these sights were rarely used by gun pointers. They were lashed securely to the gun barrel, and, recoiling with the barrel, jammed back against the unwary pointer's eye. Therefore, when used at all, they were used only to take an initial sight for purposes of estimating the range before the gun was fired.

Notice now two things about the process. First of all, the rapidity of fire was controlled by the rolling period of the ship. Pointers had to wait for the one moment in the roll when the sights were brought on the target. Notice also this: there is in every pointer what is called a "firing interval"-- that is, the time lag between his impulse to fire the gun and the translation of this impulse into the act of pressing the firing button. A pointer, because of this reaction time, could not wait to fire the gun until the exact moment when the roll of the ship brought the sights onto the target; he had to will to fire a little before, while the sights were off the target. Since the firing interval was an individual matter, varying obviously from man to man, each pointer had to estimate from long practice his own interval and compensate for it accordingly.

In addition to the gun 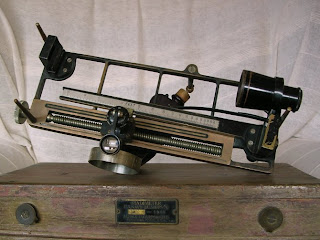 pointer and improvements there, a couple of ideas were being developed. One of them being the invention of the stadimeter by a young officer named Bradley Fiske:

The stadimeter uses a system of mirrors, as in a sextant, to bring two images into coincidence. In practice, a sailor would identify a distant ship, adjust the stadimeter for its mast-head height (a figure available in published accounts), bring the image of the mast-head into coincidence with the water line, and read the distance on the instrument’s drum. Stadimeters were widely used in World War I and again in World War II.

The stadimeter allowed accurate ranging. As set out here, the stadimeter was a component of submarine periscopes:

This image shows the view through the periscope with the stadimeter in use. A split prism is used to superimpose a second image of the target over the actual image. The captain adjusts the prism so that the waterline of the second image is set on the masthead of the actual target image. The height of the masthead from the water is entered on the dial, and the reading 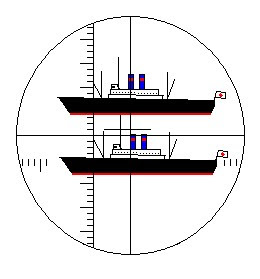 obtained. The stadimeter actually measures angles, not distance. If the masthead height is entered accurately, the range will be correct. Getting the masthead height wrong gives an incorrect range. (The same principle is used by surveyors, though they have the obvious advantage of basing their ranges on a graduated pole of known length held by an assistant.) In practice, the most accurate ranges were always obtained during exercises, since the subs were operating against units of their own fleet, and masthead heights were always known. Enemy warships and freighters often involved a certain amount of guessing, though recognition books were careful to list masthead heights whenever they were known.

Another ranging tool was the Barr & Stroud rangefinder:

While looking through the optic, two images are seen in the right eyepiece. The upper image is upside-down; the lower, rightside-up. An object, such as a prominent rock or tree, is found in the image. A thumb wheel is then turned which will bring the two images into coincidence. When they are lined up, one on top of the other, the range to the object is read in the left eyepiece. Accuracy is quite remarkable, within about 5 yards at 1000 yards or so. They can be hand-held, but they are easier to use and more accurate if a tripod support is used. The same is true of the big binoculars. With the naval models, both images are upright.

After substantial trial and error, a system was developed to take advantage of better rangefinding as set out here:

The range-finder group consists of an officer and several men, well-trained in the practical use of the instrument and having especially keen eyesight.

When an enemy ship is first sighted, they take station at the most reliable range-finder on the ship and use this. In the event of casualty to it they either shift to another instrument, or the work is taken up by another crew stationed at the other range-finder.

When the enemy ship is forst sighted, and at the direction ofthe fire-control officer, a range-finder reading is taken to determine her distance, and the time noted by stop-watch. Also the bearing of the enemy vessel is taken at the same instant, with a contrivance called a "bearing-indicator". At intervals of 30 seconds from the first range and bearing, and from each other, take a series of ranges and bearings. By plotting each consecutive range and bearing at the proper time interval distance from each other, you can establish on a chart a series of fixes, or positions of the enemy ship at various short intervals. A line drawn carefully through these fixes will give the course of the enemy, and from it you can also determine his rate of speed. This is designated as the "determination of the course and speed of the enemy".

The actual determination of this course and speed is worked out in a station below decks, called the plotting-room, the ranges and bearings and the time intervals being communicated to the plotting-room by the range-finder group. As soon as the course and speed is found accurately, it is transmitted to the fire-control officer in order that he may make such calculations as are necessary to determine the initial (gun) range and deflection at which to open fire, allowing for all conditions at the time that are other than standard.

Until the acceptance of these improvements, however, ship to ship gunnery was not very accurate:

The pre-dreadnought battleships combined heavy-calibre ship-killing guns, typically of 12 inch, with a secondary and tertiary armament able to generate a hail of fire destroying the less protected parts of enemy ships. At the Battle of the Yalu River (1894) and the Battle of Santiago de Cuba (1898), this hail of fire destroyed most of the vessels of the defeated side. At Santiago, none of the four U.S. battleships present scored a single hit with their 12- and 13-inch guns. These were short-range engagements. At Yalu River, the victorious Japanese did not open fire until the range had closed to 3,000 yards; naval guns were still too inaccurate to score hits at a longer range.

By the early 1900s, British and American admirals expected that future battleships would engage at considerably longer ranges. They would need to do so, because torpedo ranges were increasing; for example, in 1903, the US ordered a torpedo effective to 4,000 yards. Both British and American admirals concluded they needed to engage the enemy at longer ranges. In 1900, Jackie Fisher, commanding the Royal Navy Mediterranean Fleet, ordered gunnery practice with the 6-inch guns at 6,000 yards. By 1904, the U.S. Naval War College was considering the effects on battleship tactics of 7-8,000 yard range torpedoes.

At the short ranges expected for combat in the 1890s, lighter guns had good accuracy; combined with their high rate of fire, this produced the lethal 'hail of fire' effect. As ranges increased, the accuracy of light and medium-calibre guns declined more rapidly than that of heavier weapons. "Moreover at long ranges gunners had to 'spot' the fall of shot to correct their aim... The longer the range, the lower the maximum theoretical rate of spotted fire."

The next and final post in this series will deal with the continued mechanization of the gunfire calculations and the resultant increases in naval gunfire accuracy.
Posted by Mark Tempest at 6/22/2008 08:32:00 PM