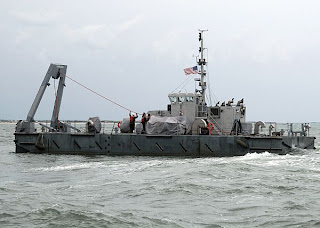 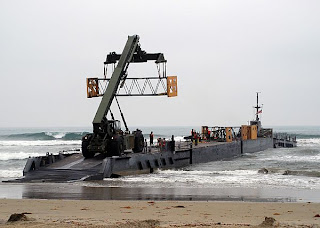 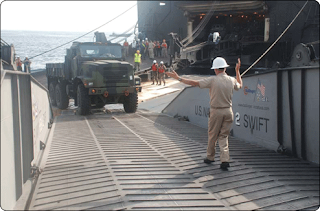 The Landing Craft Air Cushion (LCAC) is a high-speed, over-the-beach fully amphibious landing craft, capable of carrying a 60-75 ton payload. It is used to transport the weapons systems, equipment, cargo and personnel of the assault elements of the Marine Air-Ground Task Force from ship to shore and across the beach. LCAC can carry heavy payloads, such as an M-1 tank, at high speeds. The LCAC payload capability and speed combine to significantly increase the ability of the Marine Ground Element to reach the shore. Air cushion technology allows this vehicle to reach more than 70 percent of the world's coastline, while only about 15 percent of that coastline is accessible by conventional landing craft.

Or by lots of helicopter trips, but you need secure 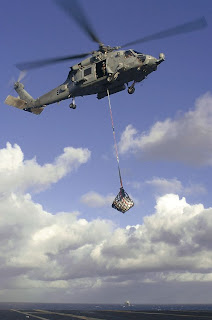 landing areas in either case. H-60 helicopters, apparently to be supported on the aircrafter carrrier Vinson, can carry a little over 4 tons in a sling under the aircraft.

Barges and ships with cranes can lighter off shore.

One of the key problems is water - and a couple of barges with desalination equipment and a pipeline to shore would be helpful. Or a water carrying variation using tankers...