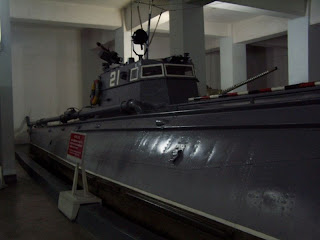 25 June 1950- The army of North Korea rolls into South Korea and the Korean War is on. A little over a week later, the "Greatest Korean War Sea Battle" occurs. The North Koreans now have display in one of their museums commemorating their great victory:

Seven powerful torpedo boats of the DPRK Navy caught an American cruiser, USS Baltimore (CA-68) unaware and turning together toward the imperialist war machine, raced at high speed - loosing a spread of torpedoes that sank the mighty 17,000 ton cruiser, sending 1700 sailors to their deaths. 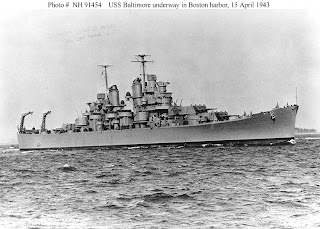 This glorious victory was one of several naval battles won by the Navy of the Democratic People's Republic. The actual lead torpedo boat that lead the attack is on display at the Victorious Fatherland Liberation War Museum. 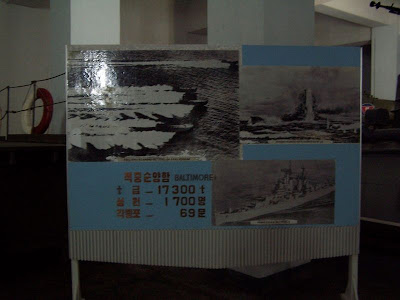 Surely you studied this in American history courses about the Korean War?

Probably not. Like a lot of the myths created by the North Korean government, it never happened. As noted here:

A museum in Pyongyang, North Korea, preserved a propaganda poster claiming that the Baltimore was sunk by the Korean People's Navy on 2 July 1950. A torpedo boat which 'sank it' is also 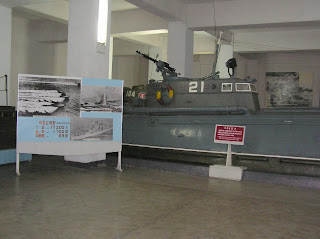 displayed there. In fact, the Baltimore was never deployed to the Korean War, nor did it see action again after World War II. The actual battle that occurred on 2 July involved the USS Juneau as well as HMS Black Swan and HMS Jamaica, who together destroyed several Korean torpedo boats escorting supply vessels without any significant return fire from the North Koreans.

It seems that the real battle didn't really work out so well for the DPRK Navy:

In the early hours of July 2, as the allied fleets converged on Korea, U.S. cruiser Juneau, British cruiser Jamaica, and British frigate Black Swan discovered 4 torpedo boats and 2 motor gunboats of the North Korean navy that had just finished escorting ten craft loaded with ammunition south along the coast in the Sea of Japan. The outgunned North Korean torpedo boats turned and gamely pressed home a torpedo attack, but before they could launch their weapons, the Anglo-American flotilla ended the threat; only one torpedo boat survived U.S.-British naval gunfire to flee the scene. After this one-sided battle and for the remainder of the war, North Korean naval leaders decided against contesting control of the sea with the UN navies. The surviving units of the North Korean navy eventually took refuge in Chinese and Soviet ports. 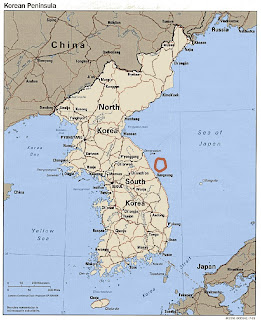 July 2, 1950 — The only pure naval action in which an American warship was involved in during the Korean War was fought off Chumunkin, on the east coast, when four North Korean torpedo boats attacked the cruisers USS Juneau (CL 119) and HMS Jamaica and the frigate HMS Black Swan. Three of the torpedo boats were destroyed; none of the allied ships were hit.

Action of 2 July 1950, Jamaica and the American cruiser USS Juneau were patrolling together near Chumunjin when four North Korean MTBs were detected escorting a number of fishing trawlers. The MTBs were destroyed by the cruisers, and three trawlers were sunk. Light artillery opened up from the shore, and the warships were forced to withdraw.

As the 59th anniversary of this "Great Sea Battle" nears, it's worth a salute to the crews of the Juneau, Black Swan and Jamaica. And a small tip of the hat to the creative "spin artists" of the DPRK.

Wait a minute - what about USS Baltimore? Until 1955 she was never anywhere near Korea:

Baltimore had been in "mothballs" for about five years when the Korean War and the resulting Cold War emergencies called her back to active service. Recommissioned in late November 1951, she soon joined the Atlantic Fleet. In 1952-1954 she deployed regularly to the Mediterranean Sea and, in June 1953, participated in the Naval Review held at Spithead, England, in honor of the coronation of Queen Elizabeth II. Early in 1955 Baltimore went back to the Pacific for a Far Eastern cruise. She then began deactivation at Bremerton, where she was decommissioned at the end of May 1956. Just under fifteen years later, in February 1971, USS Baltimore was stricken from the Naval Vessel Register. She was sold for scrapping in May 1972.

Of course, North Korea now has a much improved reputation for honesty.