Shifting their area of operations again, Somali pirates have nabbed a ship off Oman, as reported in Pirates hijack German-owned ship off Oman-NATO :

Suspected Somali pirates have seized a German-owned cargo ship off the coast of the Gulf Arab state of Oman, the first recorded attack in its territorial waters, NATO alliance staff said on Friday.

The MV Charelle was attacked 60 nautical miles south of Sur on the Omani coast, NATO Lieutenant Commander Alexandre Fernandes said aboard NATO's Portuguese warship Corte-Real, which is on anti-piracy patrol off Somalia. 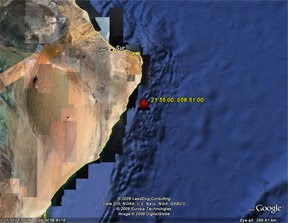 "The Charelle is now heading southwest towards Somalia," Fernandes said. "This is the first case of armed robbery outside the normal operations area of the pirates." 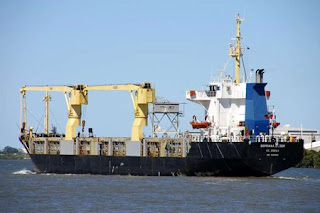 Photo is of ship when it sailed as Sofrana Bligh by Sinisa Aljinovic from Shipspotting.com and used in accord with the rules set forth therein.
Posted by Mark Tempest at 6/12/2009 07:38:00 PM