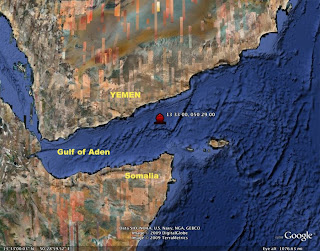 At 0315 utc a merchant vessel was under attack by one skiff in position 13 33 n 050 29 e. One white hull speed boat about 7 metres in length approached a tanker underway. When the speed boat came closer to 10 metres, pirates started to open fire at the vessel.

A coaliton warship arrived at location. Another warship escorted the vessel.
The merchant vessel is safe and underway to destination.

All vessels are advised to remain vigilant.

It appears that a group/groups of pirates in skiffs are targeting ships in this area with the assistance of pirate mother vessels that can sail far away from coast.

My GoogleEarth version puts the attack in the Gulf of Aden, .

On Sunday, May 31, a white skiff with four personnel onboard fired small arms at a tanker, identified as the MT British Mallard which is owned by Jalouise Ltd, managed by BP Shipping and flagged with the Isle of Man (British). The incident reportedly took place at 0200 UTC and approximate position 15:59N 048:42E, about 88nm southeast of Al Irqah and 96 nm southwest of Al Mukalla. The vessel carried out evasive maneuvers and managed to escape. (Note by E1: I think the report should read 12:59 N, 48:42E as the stated position is in middle of Yemen, but I'm ready to be corrected)
***
On Friday, May 29, two separate vessels, the MV Clementine Maersk and the MV Sea Phantom, reported suspicious approaches at approximate positions and timings of 12:05N 045:30E at 1200 UTC and 12:13N 046:27W at 1122 UTC respectively. Both vessels reported one blue-hulled skiff in the area though there had yet to be confirmation on whether arms were sighted. International navies in the vicinity purportedly responded and provided assistance to both vessels. Later that morning, the MV Lake Global also reported another suspicious approach at position 12:22N 046:26E and spotted a possible mother vessel in the area.
***
On Monday, June 1, at approximate position 13:33N 050:29E, about 99 nm southeast of Al Mukalla, the MT United Lady was fired upon by pirates in one white-hulled skiff at 0215 UTC. The skiff was estimated at seven meters in length. The Liberian-flagged tanker carried out evasive maneuvers, including steering the vessel in a zig-zag manner, used high pressure fire hoses and other anti-piracy measures, to prevent a boarding. At about 0227 UTC, the pirates gave up the attempted attack and moved away.

The last report is the same incident as the first reported above (again, thanks to Bryan). Al Mukallah is in Yemen, as seen here: 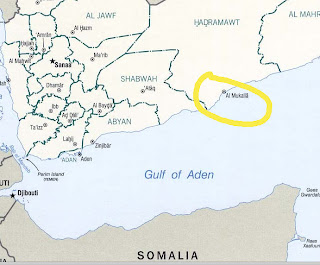