From the NATO Shipping Center ATTEMPTED PIRACY ATTACK ON 18 JUNE:

3. TYPE OF SHIP: BULK OF CARRIER

B. DETAILS OF INCIDENT: 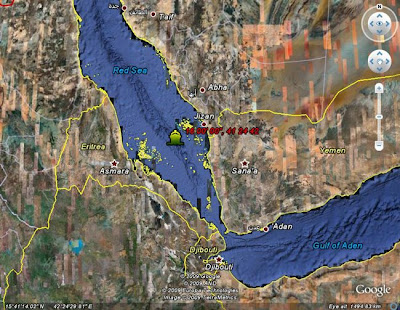 14. NUMBER OF PIRATES/ROBBERS: ABT 30 PIRATES IN THREE SPEED BOATS.

18. METHOD OF APPROACHING: TWO SPEED SKIFFS FROM PORT BOW AND CROSS HEAD THEN APPROACHING S'SIDE, ONE SKIFF APPROACHING PORT SIDE, CLEARLY SEE 9 PIRATES IN BOAT WITH MACHINE GUN IN HANDS AND ONE ROCKET ON THE SHOULDER.

22. ATTACHMENT WITH SHIP PROTECTIVE EQUIPMENT WHICH DESIGNED BY CREW
(CABLES LAID BOTH SIDES EXACT VOLTAGE 220 ONLY SWITCHED ON WHEN PIRATES ATTEMPT BOARDING)

I corrected some typos.

Photo by Geert van Kesteren from ShipSpotting.com and used in accord with ShipSpotting requirements. GoogleEarth is my guess.

UPDATE: From the ONI Worldwide Threat to Shipping Report (to 19 June 2009):

1. SOMALIA: International Maritime Bureau urges 'citadel space' anti-piracy technique, 10 Jun 09. The IMB is urging shipping to adopt the ‘citadel space’ concept if their vessels are boarded by Somali pirates as it is proven to thwart hijackings. Both the IMB and EU NAVFOR have advised ship owners to establish a piracy attack muster point or ‘citadel space’. However, Noel Choong, head of IMB’s piracy reporting center, said many in the industry, including private security services, remain unaware of the concept or how it works. The citadel space should be located in an inside location without portholes, such as the steering space gear area, where all crew can retreat to after they have disabled the vessel, should pirates have managed to board. With the ship disabled and the crew secure behind watertight doors, Mr. Choong said this should allow enough time for naval patrols to be alerted and a helicopter sent to the rescue. The pirates would be “helpless”, unable to even start the vessel’s engines without the crew’s help and also aware military assistance would be on its way. Mr. Choong said naval response times have grown quicker and a helicopter could be on the scene within 20-30 minutes. Ship owners have expressed some reservations over the citadel space idea concerned that it puts all the crew at risk in a single location. “We have past cases that show this is successful,” Mr Choong said. The defense technique was successfully used both in the attack on the (MAERSK ALABAMA) and on the Chinese vessel (ZHEN HUA 4) last year (LL).
.
2. BAHRAIN: Combined Maritime Forces issues new update for mariners, 9 Jun 09.
Following observed changes in the pattern of attacks by Somali pirates, the Combined Maritime Forces (CMF) issued an updated Special Maritime Advisory message. The advisory provides several new recommendations in light of recent changes in tactics used by pirates operating in the region and reiterates fundamental lessons learned as a result of the CMF’s counter-piracy efforts. Merchants are urged to use the weather to their advantage, planning new routing off the east coast of Somalia due to the start of the southwest monsoon season. The message further details the pirates’ extended range of operations off the Eastern Somali coast, stretching all the way to and beyond The Seychelles, with the use of “mother ships.” These larger vessels allow them to operate further out from shore, providing an afloat staging platform for their attacks. Another new tactic highlighted in the advisory is the potential move into the southern Red Sea. Finally, pirates have also recently increased their number of attacks during the hours of darkness,highlighting the need for heightened vigilance of merchant mariners during both day and night time transits through the high risk areas. The majority of attacks during 2008 and early 2009 took place during the day time in the Gulf of Aden. Recently pirates have attacked vessels at night and have conducted attacks far off the eastern coast of Somalia. However, a combination of adverse weather conditions in the Somali Basin, coupled with increased presence by international navies has led to the aforementioned observed changes in the pirates’ tactics. The advisory provides routing advice to minimize the risk of attack during the southwest monsoon,
noting that the sea conditions off the East coast of Africa during the period from end of May to early September will reduce the likelihood of successful attack. Mariners are encouraged to take advantage of areas of heightened sea state but should continue to remain at a high state of alert. In addition to the tactical changes and expansion of the “traditional” pirate hunting grounds, the message also highlights a new area of potential risk following a confirmed pirate attack in the Southern Red Sea. The attack took place in late May, at the Northern end of the Bab el Mandeb. As a result, all vessels transiting the Red Sea approaching or departing the Gulf of Aden should continue to employ the recommended actions to deter and evade attack (USCENTCOM Press Release).
***
1. GULF OF ADEN: Tanker fired upon 15 June 09 at 1305 local time while underway in position 12:58N – 048:27E. One skiff approached the vessel to within about ten meters and fired with gun and RPG rounds. The vessel conducted evasive maneuvers and the skiff eventually broke away and fled the scene. An Iranian warship arrived on scene in about 20 minutes followed by a coalition helicopter later (Operator, IMB).

Having the crew gathered in a known, secure location opens up a world of possibilities for anti-piracy units.
Posted by Mark Tempest at 6/20/2009 12:34:00 PM