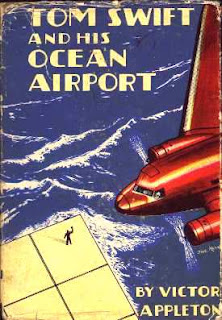 While the commercial potential of aircraft travel across wide oceans first was being explored, a few visionaries, aware of the constraints put on air travel by the need to refuel transoceanic aircraft began to think of ways of placing airports in the middle of the ocean for fueling and other purposes.

In the case of Tom Swift, such a project turned on the procuring of a special wood . . . and a dispute with the only country from which that wood could come.

In other case, visionaries like a former du Pont engineer named Robert Armstrong worked on a concept very similar to today's offshore oil rigs - only bigger.
As set out here, Armstrong's vision included what to modern eyes appears to be the flight deck of a modern aircraft carrier - mounted on a complex system of floatation "legs." Eight of these "seadromes" were to be 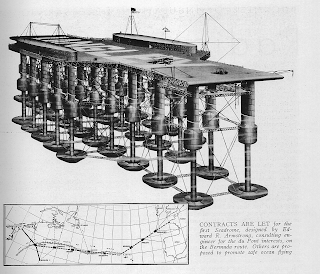 anchored at regular intervals across the Atlantic. Each would have fuel, hotels and restaurants.

The idea was similar to what happened in the planning of air routes across the Pacific, except that remote islands (Midway and Wake, for example) replaced the man-made structure proposed by Mr. Armstrong. Armstrong was not alone in his planning- as noted here:

But even a giant "air express" couldn't stay aloft long enough to cross the Atlantic and Pacific oceans in the 1920s. So aviation visionaries started dreaming of creating stepping stones from the United States to Europe and Asia. Beginning in 1925 and continuing for years afterwards, magazine writers and artists forecast the construction of giant mid-ocean airports where planes could land and refuel while passengers stretched their legs.

One German scientist proposed giant "ice" ships be used for mid-ocean airports - a concept that seems to have inspired the British during WWII to look into ice ship aircraft carriers (see here).

Though the concept might seem a little too "out there" for the 1930's, Armstrong actually built scaled down models of his "seadrome" and tested them - see here for the source of the testing photo nearby.

Armstrong's vision of these floating runways was interesting:

A seadrome would be a “floating landing deck,” essentially an anchored, stormproof airport and refueling station. It would ride high above the waves, moored at one end so as to trail the wind (thus always staying in the best position for landings), and be big enough to permit the landing and takeoff of most planes. It would be supported 70 feet or more above the surface by tubular columns that would allow waves to pass through underneath. The columns would terminate in ballast tanks 100 feet below the surface, where they would be stable, since waves are surface disturbances only. Armstrong said eight of them, “anchored to the bottom of the Atlantic, at intervals of approximately 350 miles,” would be enough to reach Europe. 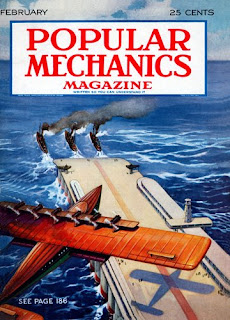 He had begun exploring the idea in 1913. Two years later, he had completed the first design, and in 1922 he built a 1/300 scale model. French investors showed moderate interest but declined to finance the venture, so Armstrong set to work refining his plans.

There were several false starts and the project got a name for the first flight deck:

He "sold" his idea to the eminently practical duPont and General Motors financiers. They have provided him one and three quarters million dollars to build his first seadrome. Construction has already started on it. It will be called the Langley after the late Samuel Pierpont Langley, designer of the plane which, except for accidents, might have flown before the Wrights' plane did in 1903.

The Langley will have an unobstructed airplane runway 1,200 ft. long by 200 ft. wide. At the mid-sides the platform will project to give room for a hotel (with restaurant and bar), hangars, storage sheds, weather bureau, offices, hospital wards, lighthouse. Platform and buildings will be 80 ft. above calm water level. Because no Atlantic waves have ever been seen more than 45 ft. high, it is improbable that the runway ever will be awash. The buoyancy columns with their stabilizing disks will reach 160 ft. below water level. That is considerably deeper than any wave action has ever been noted.

As these efforts (and funding) vanished, Armstrong kept plugging away - even though the projected cost of his eight seadromes mounted to $32 million dollars in 1920's dollars (about $390 million in 2009 dollars)- and so he tested:

In the summer of 1929, Armstrong assembled a 1/32 scale model, 35 feet long, 10½ feet wide, and with a draft of about 6 feet. He made it of sheet steel and anchored it in the Choptauk River, an arm of the Chesapeake Bay, near Cambridge, Maryland. Over six weeks, he tested it against a variety of wind, wave, and current conditions. The results, Armstrong said, indicated that a full-scale seadrome in the open ocean could survive 280-mile-per-hour winds and waves to 144 feet high.

Much of Armstrong's project was based in his thinking that the range of aircraft would not be able to be extended to "ocean-hopping" distances. As longer ranged airplanes were developed it did not spell the end of his seadrome dream, though. Promises of government funding appeared into the early 1930's (see here and here).

Armstrong faced alternatives and competition (not including the development of long range aircraft). See here for the story of the German mid-ocean commercial seaplane tender Westfalen, which serviced seaplanes enroute from Africa to South

America and included a catapult shot to get the planes back into the air. 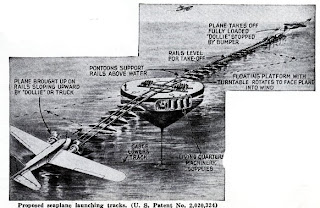 Another form of seaplane handling man-made island can be seen here, which used a rail system for aircraft recovery.

As you might have gathered, Armstrong's "seadrome" idea never got off the shore. That's not to say that there aren't modern variation on the same theme - some of them military inspired - like these modern artist renderings of a "seabase" - 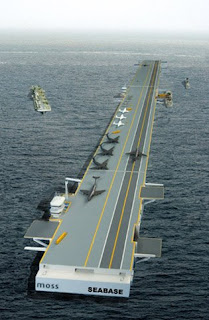 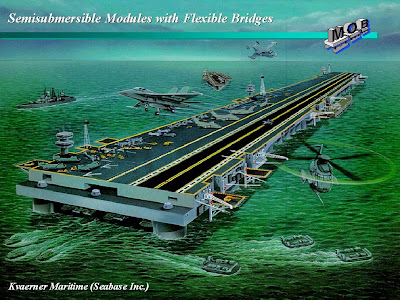 Of course, there are variations, 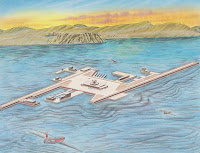 And a proposal for an offshore airport/seaport for San Diego here.