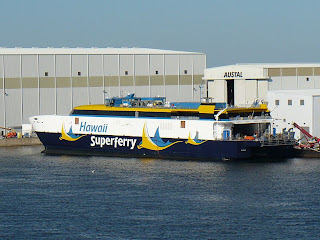 Hawaii Superferry has asked to abandon its two high-speed catamarans to creditors because of the significant cost of maintaining the vessels as the company moves through bankruptcy. MARAD, which guaranteed construction loans for the catamarans; Austal USA, the Alabama shipbuilder that built the vessels; and the state of Hawaii, which provided harbor improvements, are secured creditors with mortgage rights. MARAD, which holds first priority on the mortgages and is owed $135.7m, would likely take possession of the catamarans for charter if the bankruptcy court approves Superferry's request. Austal USA, which holds the second mortgage, announced last week that it is writing off the $22.9m it is owed for construction loans. A hearing on Superferry's request is set for July 1.

Reported here that the ferries headed from Hawaii to Alabama about March 30. 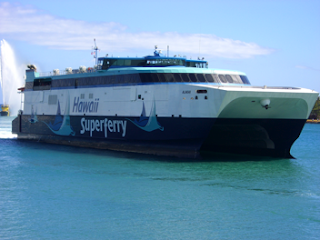 The Feds assert they will repossess the ferries, as set out here:

The U.S. Maritime Administration says that it plans to repossess and sell a pair of fast ferries built at Austal USA for Hawaii Superferry Inc.

Hawaii Superferry owes $136.8 million to the agency — commonly known as MARAD — which guaranteed the loans used to buy the ferries. It has another $22.9 million outstanding on a pair of loans from Austal.

MARAD reported this week that it plans to take possession of the ferries, now docked at Atlantic Marine in Mobile, as soon as it receives approval from bankruptcy court in Delaware. Hawaii Superferry Inc. filed for Chapter 11 reorganization in that state May 30.

The ferry vessels were purchased in 2004 for a combined price of $190 million, according to Austal, which now puts their value at about $87 million each, or $174 million together.

Austal Ltd., the Australian parent company of the Mobile shipyard, said Tuesday that it is writing off about $11 million, after taxes, for the 2008-09 fiscal year related to its ferry loans.

Maritime analysts had expected the ferry vessels to be retrofitted by Austal and chartered directly to the military. Jay Korman of The Avascent Group, a Washington, D.C., consulting firm that tracks defense programs, said Tuesday that MARAD is opting to sell the vessels rather than charter them directly, in order to recoup at least some of the costs for taxpayers.

Austal Ltd. President Bob Browning said he was disappointed that MARAD decided to seize the ferries without involving Austal in a project to prepare them for military use.

MARAD made the ferry loans under its Title XI program, which is supposed to support U.S. shipyards by reducing their reliance on military work.

Browning said that Austal approved lending $23 million to the ferry venture in part because the deal would help raise the profile of Austal's U.S. shipyard, which at the time had been operating in Mobile for only a few years. Although it succeeded in doing that — the Mobile shipyard in November won a potential $1.6 billion contract to build up to 10 high-speed fast ferries for the military — Browning said the company's lending days are over.

I'm a little disappointed that the Navy isn't picking up on these ships for conversion for use in projects like Africa Station, and other situations where high speed Ro-Ro assets might be useful. See the comments here.

Some, apparently seeing military conspiracy to keep Hawaii in the Union, report a military role for these ferries has always been in the background. See here and here from whence comes this old pdf: 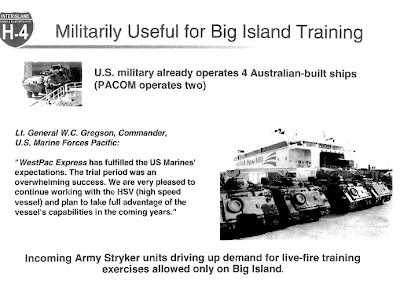