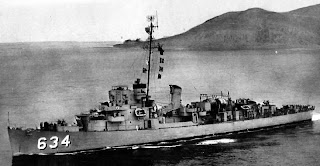 Interesting bit of naval history contained in U.S. Navy Humanitarian Relief? amidst a discussion of how U.S. Navy ships could be used to provide emergency electrical power during certain civil disasters like hurricane Katina:

Consider the Wiseman, for which more data is available. This ship had oil fired boilers producing steam to turn turbine generators which in turn powered electric propulsion motors. This electric ship configuration is optimal for providing electric power ashore since all the power in the ship is already being converted to electric. The Wiseman had transformers and cable reels topside to deliver power at high voltages over relatively long distances. Wiseman powered the city of Manila during WWII and the port of Mason during the Korean War. Wiseman delivered 5,806,000 kWh to Manila over five and a half months2, giving an average generation capability greater than 1.4 MW.

The US Army also used ship to shore power to power remote stations. One notable case is that of the Sturgis/MH-1A, A WWII era Liberty ship equipped with a nuclear power plant used to provide power to the Panama Canal Zone from 1968 to 19753. The MH-1A power plant on the Sturgis generated 10MW electrical power which allowed the canal locks to be operated more frequently.

See here for a previous post on floating nuclear power plants, including the Sturgis.

It appears that the above quoted paragraph may need some addition - 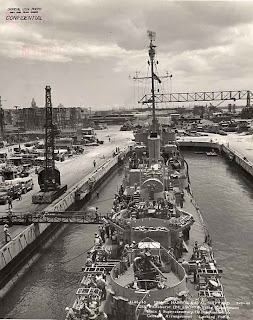 according to DANFS here, USS Whitehurst after taking a hit from a Kamikaze was converted from a pure DE for other purposes:

Then, seaworthy enough for a voyage to Hawaii, Whitehurst reached Pearl Harbor on 10 May and was docked for repairs and alterations.

Once the yard work had been completed and the ship had been converted to a floating power station, Whitehurst departed Pearl Harbor on 25 July 1945, bound for the Philippine Islands. Soon after she reached Luzon, Japan capitulated. Nevertheless, the ship supplied the city of Manila with power from August through October of 1945.***

Operating as a unit of Escort Division 40, Whitehurst supplied electrical power to the dredge YM-25 into 1946.

USS Donnell(DE-56) also suffered at enemy hands before being converted to a "power barge":

Donnell sailed from Boston 31 August 1943 for transatlantic convoy duty. She guarded the safe passage of four convoys to Londonderry and return in the buildup for the invasion of Europe in June. At sea bound for Londonderry again on her fifth voyage, on 3 May 1944 Donnell made a sound contact, then sighted a periscope a few minutes later and pressed home a depth charge attack. Simultaneously she was struck by a torpedo which blew off her stern. Explosion of her own depth charges inflicted additional damage on the escort. Her casualties were 29 killed and 25 wounded.

Donnell was towed by Reeves (DE-156), Hopping (DE-155), and HMS Samsonia to Dunnstaffnage Bay, Scotland, arriving 12 May. Since repairs would have involved extensive reconstruction, she was placed in commission in reserve at Lisahally, Northern Ireland, 20 June 1944, for use as an accommodation ship. She was reclassified IX-182, 15 July 1944. Towed to Plymouth, England, in July to embark passengers and take on cargo, Donnell was towed in August to Cherbourg, France, where she supplied electric power to shore installations.

In 1946, she was equipped with ship/shore power conversion equipment, with which, during the winter of 1947-48, she provided Portland, Maine, with emergency electric power after normal power resources had failed because of forest fires and lack of rain. In August 1950, Foss took part in rocket experiments at Cape Canaveral, recording data after seaward firings.

Reassigned to the Pacific Fleet, Foss departed Norfolk 29 September 1950, reaching San Diego on 11 October. Six days later, she sailed for duty in the Far East, where her special ability to provide power to the shore was used at Chinnampo, Inchon, and Hungnam in November and December. She arrived at Ulsan Man, Korea on 25 December and remained until 18 August 1951, providing power for an Army unit stationed there.

Subsequently converted to a floating power station—the necessity for ship-to-shore electrical facilities having been proved during the Pacific war—at the Charleston Navy Yard, Wiseman sailed for the Pacific on 11 January 1945. Reporting to Commander in Chief, Pacific Fleet, for duty on 17 January 1945 upon transiting the Panama Canal, she set course for the Hawaiian Islands in company with the high speed transport Reeves (APD-52).

Making port at Pearl Harbor on 3 February, the destroyer escort operated for a month in the Hawaiian Islands before setting sail for the Philippines on 3 March. Arriving at Manila on the 23d, she commenced furnishing power to that nearly demolished city on 13 April and, over the next five and one-half months, provided some 5,806,000 kilowatt-hours of electricity. In addition, Wiseman's evaporators furnished 150,000 gallons of drinking water to Army facilities in the harbor area and to many small craft. Her radios were also utilized to a great extent. Placed at the disposal of the Navy's port director, the ship's communication outfit was used to handle harbor radio traffic until the director's equipment arrived and was installed ashore.

Following her vital service at Manila and projected operations at Ketchikan, Alaska, shelved, Wiseman shifted to Guam, arriving on 18 December 1945, where she provided power for the Army dredge Harris (YM-25). Departing Guam on 26 March 1946, in company with sistership Whitehurst (DE-634), she paused at Eniwetok, in the Marshalls (28-29 March), then returned to the United States via Pearl Harbor (4-6 April 1946). Decommissioned at San Diego on 31 May 1946, Wiseman was placed in inactivated status on 19 December 1946, then out of commission, in reserve, on 3 February 1947, and moved to Long Beach. Subsequently, the auxiliary ocean tug Koka (ATA-185) towed Wiseman from Long Beach back to San Diego (16-17 November 1948). 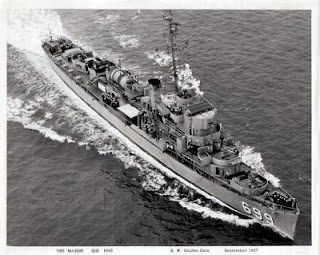 After the outbreak of hostilities in Korea in the summer of 1950, the Chief of Naval Operations recommended that Wiseman be "reactivated at the earliest practicable [time] for distant duty including use as [an] Electric Power Supply Ship." Accordingly, Wiseman was recommissioned at San Diego on 11 September 1950, and, under the command of Lt. Comdr. Jay W. Land, rushed to Korea, reaching the port of Mason, near the mouth of the Naktong River, at the western anchor-point of the former beachhead at Pusan. As she had done at Manila in 1945, Wiseman supplied electricity to a city unable to generate its own. Later, the ship provided comforts-of-home to units of the 1st Marine Division quartered on the nearby pier, providing hot showers, cigarettes, and hot meals cooked in the ship's galley. The destroyer escort also provided instruction in seamanship, gunnery, radar, sonar, and damage control to 80 midshipmen from the Republic of Korea (ROK) Naval Academy and 120 ROK Navy enlisted men.

Departing Tokyo 31 August, she sailed for Pearl Harbor, arriving 24 September. There she took an equipment which transformed her into a mobile power unit. With this new asset she returned to Guam 26 October to provide ship‑to‑shore power services until the end of the year.

The destroyer‑escort returned to the United States in early 1946 for shipyard overhaul at San Pedro. On 16 May she once again departed for the South Pacific. Arriving at Kwajalein on the 31st, she provided power to that island until September. She then sailed for Guam where she received orders for Tsingtao and Fusan, Korea, as the 7th Fleet lent support to the aims of American policy in China and in the United States occupation zone of Korea.

Marsh returned to her home port, Pearl Harbor, 31 March 1947 and for the next 3 years operated in the Hawaiian Islands and off the coast of California, deploying in 1948 for 2 months duty at Eniwetok.

Her next Pacific deployment came after the invasion of South Korea by the Communists in June 1950. Marsh arrived at Yokosuka 7 September and departed on the 14th for Pusan, where she supplied power to the city for 2 weeks. On 9 October she entered Inchon Harbor and remained as support for that area’s defense until the end of the month. She supplied power at Masan, a seaport on Chosen Strait, for a month starting 9 November, then turned to Pusan where she remained as a ship‑to‑shore power unit for the remainder of her tour.

On 8 February 1951, at Pusan, several of her crew were credited with heroic actions in fighting fires which had broken out in the Army gasoline dump adjacent to the pier where the ship lay.

The distinguishing characteristics of the converted DEs is the rack of electrical cable amidships after the stack.

While there are other situations in which naval ships have provided emergency power to cities, I do not recall hearing before about these unique "electric ships" or of their use both as warships and as a power source to aid in civil-miliary operations.

Floating power plants exist today, but none of them could also shell the beach or take on submarines.