Russia to send 1 warship,2 support vessels to Gulf of AdenAt least that's how I read Russia Sends Third Naval Task Force to Fight Piracy at the Gulf of Aden. I assume the "big" ASW ship has several helicopters:

The third task force of RF Navy Pacific Fleet has set off from Vladivostok to the Gulf of Aden to fight piracy. The task force comprises big anti-submarine ship “Admiral Tributs”, tanker “Boris Butoma” and tugboat “MB-99”.
Along with sailors the detachment also includes a Naval Infantry subunit, which will execute tasks of protection of commercial ships passing through the gulf. The chief of northeast branch of RF Pacific Fleet, 1st-Class Captain Sergei Alekminsky stated that the mission will differ from previous counter-piracy missions. The operations are expected to be more complicated. “Presence of our ships will hamper pirates’ activity in the region urging them to change their attack tactics” – stated Sergei 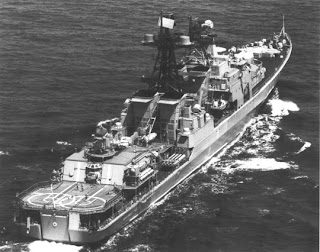 Alekminsky.
According to the captain, the RF Navy Pacific Fleet holds information relating to attacks on commercial ships included in the convoy of Navy ships. “Not all vessels can be furnished with a security group and therefore some of them remain unguarded. As a rule, pirates track radio communications and select these very vessels from a vessel train.” – said Sergey Alekminsky.