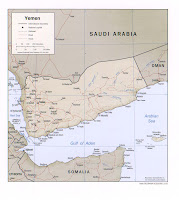 The Somali pirates appear to be seeking calmer waters, both in the weather sense and in the sense of areas where merchant shipping has not been provided with escorts - reports of new attacks in the Red Sea:
Tanker attacked in the Red Sea:

A Yemeni oil tanker was attacked off the port of Makha at the south-eastern tip of Yemen in the Red Sea.

Somali pirates were reported by the local SABA news agency to have intercepted the tanker in a hijack attempt, but the crew managed to escape as it sent out a distress call to Coast Guards in the area who offered immediate assistance.
****
The 33,209 dwt chemical tanker Stolt Strength for example, came under attack again from Somali pirates in the Gulf of Aden on May 31, at the southern end of the Red Sea, near the port of Makha.

See here for report on a successful hijacking off Oman and here for a report on the latest Stolt Strength attack.

Here's a recent warning message for the mouth of the Red Sea:

Two warships in the area.

I am reminded of that old bit of baseball wisdom on how to be a good hitter: "Hit 'em where they ain't"