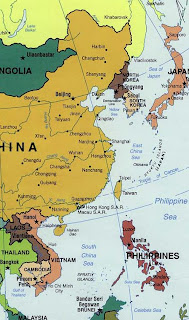 CBS News, apparently believing that the DPRK was doing something other than testing the waters (so to speak) to see if the various UN and US and other forces might actually board a ship leaving North Korean waters and find a cargo of stuffed monkeys, reports in North Korean Ship Turning Around:

The North Korean ship Kang Nam has turned around and is heading back toward the south coast of China, reports CBS News national security correspondent David Martin.

The ship, which left a North Korean port on June 17, is the first vessel monitored under U.N. sanctions that ban the regime from selling arms and weapons-related material.

It is currently in the vicinity of the Parcel Islands 100 miles off Vietnam, Martin reports, adding that there is no specified reason as of now for why it has changed course.

"With still no long range missiles on the launch pads and no time to get them ready for a July 4 launch, it would appear the temperature is being lowered," Martin said of North Korea's threats to launch missiles at Hawaii on the U.S.'s Independence Day.

"If the ship is on its way back, it would mean that Resolution 1874 is taking effect and causing the North to retreat," Kim Tae-woo, vice president of the Korea Institute for Defense Analyses, told the Korea Herald.

If we're going to embargo North Korea, it ought to involve sinking any ship that passes across a line drawn in the sea. See also here:

Furthermore, there has never been a peace treaty formally ending the Korean War. This means the U.S., a combatant in the conflict, as leader of the U.N. Command, is free to use force against Pyongyang. On legal grounds, the U.S. Navy therefore has every right to seize the Kang Nam, treat the crew as prisoners of war, and confiscate its cargo, even if the ship is carrying nothing more dangerous than melons. Because the Navy has the right to torpedo the vessel, which proudly flies the flag of another combatant in the war, it of course has the right to board her.

And putting an end to the DPRK games. Because the next level of DPRK testing will be more severe. Perhaps a merchant ship

will be escorted by an vessel from the DPRK Navy, as limited as it is, or a DPRK submarine will leave port at the same time as a cargo ship...

Or the NORK ship could just be taking the scenic tour.