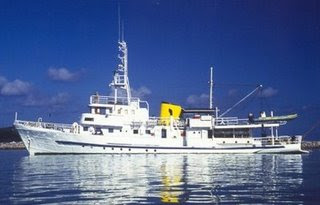 The good news is, as noted yesterday, the crew was released, the bad news is Pirates destroy Seychelles ship:

Pirates torched a Seychelles vessel off the coast of Somalia after releasing its seven crew members for a ransom, two members of the pirate group said on Wednesday.

The Indian Ocean Explorer, a maritime research ship from the Seychelles islands, was captured by Somali pirates between March 28 and 31 in the Indian Ocean.

The seven crew members were released without the ship and they returned home on Tuesday.

"We set fire to it three nights ago," said Abdullahi Qaaray, a member of the pirate group who acted as an interpreter during the ransom negotiations.

"We had asked the owners for a million dollars but in the end he paid us only $450 000," he told AFP by phone from a village near Haradhere.

"We said we would burn the ship because he was refusing to pay all the ransom. And the owner told us that we could sink it or burn it... We used some fuel and set it on fire, the ship is sunk now, you cannot even see it anymore."

Qaaray insisted that destroying the ship was not a condition set by the owner for the payment of the ransom but only a decision made by the pirates to ensure the valuable marine exploration vessel could not be recovered.