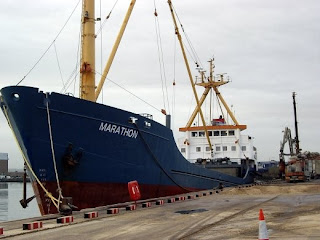 Somali pirates have been releasing ships and crew lately, but the most recent release is the most disturbing because one of the crew of a Dutch ship just released was "found" shot to death. As set out in
Somali pirates free Dutch ship, one dead:

Somali pirates have released a Dutch ship they had hijacked last month in the Gulf of Aden and one crew member was found dead aboard the boat, the Dutch defence ministry told AFP.

"The pirates let the ship, in which a crew member was found dead, leave," ministry spokesman Marcel Pullen said. "He was shot dead."

The victim had died the day of the MV Marathon's capture on May 7, he added.

The MV Marathon was being escorted to a "safe port" by the Dutch frigate De Zeven Provincien, the spokesman said, refusing to reveal the location.

There have been several recent Somali pirate apologists, asserting that the pirates have been driven to piracy by first and second world exploitation of Somali waters.

I have no doubt that these same useful idiots will attempt to explain away this death and the deaths and torture of captured crews in some way. Let me state clearly that the planned or reckless killing of unarmed merchant sailors is murder. Randomly spraying ships on the high seas with automatic weapons fire and rocket propelled grenades is not "coast guarding" or whatever "make nice" words others might attempt to apply to it. It is cold blooded indifference to the lives of other humans. Murder.

Other releases of ships and crews:
Crew of Seychelle yacht Indian Ocean Explorer released as set out 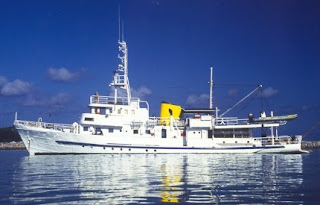 Pirates in Somalia said on Monday they had freed the seven crew members from Seychelles yacht Indian Ocean Explorer.

Pirates seized the oceanographic research cruiser at the end of March near the Seychelles' island of Assumption, the second vessel flying the Indian Ocean nation's flag to be hijacked.

"We have released the Seychelles crew, they flew this morning," pirate Hassan told Reuters by phone from Haradheere.

The crew of the recent released Nigerian tug boat report they were caught "between life and death":

Graham Egbegi, captain of the ship, MV Yenagoa Ocean, hijacked on August 5, 2008 by Somali pirates, yesterday said he and nine others aboard the ship lived daily for 10 months between life and death in the camp of the pirates.
Egbedi, David Akpoguma, Namo Musa, Usman Ochoche Agida, Lucky Edoja, John Nkanu, Effiong Joseph, Emma Okon Timothy, Okuns Kalikio and Bassey Etim were hijacked while sailing back home to Nigeria via the Indian Ocean route with their newly purchased vessel. Their hijackers, Somali pirates gave them an option of $1 million ransom fee or face summary execution. 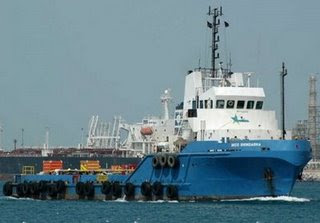 The crew, who arrived the Nnamdi Azikiwe International Airport, Abuja at about 12.30 p.m. aboard Ethiopian Airline to the embrace of the Minister of Defence, Shettima Mustafa, some security personnel and officials of Ministry of Defence, said they had what he called a traumatic experience in Somalia. They were set free by the pirates on June 5 after a $43,000 ransom was paid to their captors.
“It was traumatic to wake up daily to face bazookas, rocket launchers and other high caliber weapons pointing at you,” adding “each morning we felt it would be our last,” he said.