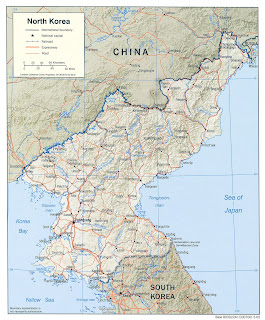 South Korea says a North Korean patrol boat entered its waters around their disputed maritime border but backed off after nearly an hour following repeated warnings.

***
The naval standoff came amid concerns that the North might try to provoke an armed clash in the area the scene of deadly naval skirmishes in 1999 and 2002 to stoke tensions that were already running high after Pyongyang's nuclear test and a barrage of missile launches last week.

The regime has also conducted amphibious assault exercises near the sea boundary and appeared to be preparing for more missile tests, including one believed capable of reaching the U.S. The missile is being readied at the new Dongchang-ni launch site on the North's west coast near China.

New commercial satellite images show the facility is ready for use after nearly a decade of construction.