Meanwhile, the U.S. is threatening to put the DPRK back on the "bad boy" list of state sponsors of terrorism:

"There's a process for it," said Clinton. "Obviously we would want to see recent evidence of their support for international terrorism."

The administration is also pushing for a UN Security Council resolution that would punish the country financially and give the international community the power to interdict suspect North Korean cargo, but Clinton acknowledged that some countries have "legitimate concerns" about targeting international shipments.

"We will do everything we can to both interdict it and prevent it and shut off their flow of money," Clinton said. "If we do not take significant and effective action against the North Koreans now, we'll spark an arms race in Northeast Asia. I don't think anybody wants to see that." 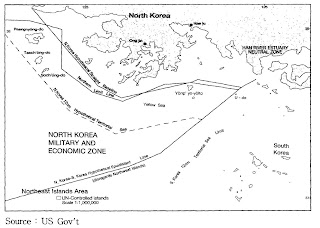 Madame Secretary, I would think that "evidence" is in the hands of your department and in the Obama administration. Though, I hasten to point out, the world is still, technically, at war with the DPRK, especially, I would assume, since they have rejected the armistice that called a halt to combat in the Korean War. I'm not sure how much "evidence" is needed to sway your lawyer's mind, but it my need for preponderance of proof is pretty much gone by now.